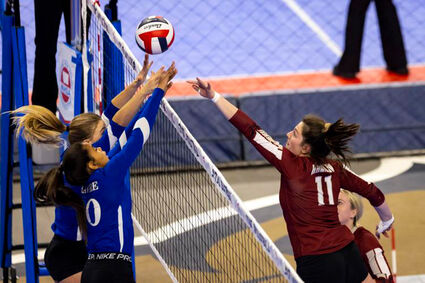 It was a busy day for the Havre Blue Ponies and Chinook Sugarbeeters at the State Volleyball Tournament in Bozeman.

The Blue Ponies opened their quest for a return trip to the title match with a sweep of Western A Hamilton Thursday afternoon at the Brick Breeden Fieldhouse. The Ponies won by scores of 25-13, 25-12 and 25-13. In the win Avery Carlson had 11 kills and 11 digs to lead the Blue Ponies. Lizzi Haney also had 11 digs, while Molly Huse had 26 assists and Yelena Miller three blocks.

The victory put Havre in familiar territory as the Ponies had a highly anticipated rematch with Billings Central in Thursday night's quarterfinals. There, however, the Ponies got beat by scores of 25-18, 25-23, 21-25 and 25-23. The Ponies put up a tough fight, but couldn't quite force a decisive fifth set.

It was a tough loss for Havre, which beat the Rams just last week at the Eastern A Divisional. In the match, the Ponies got 13 kills from Carlson, while Kyanna Jarvis and Miller had 11 each. Miller added six blocks, while Carlson tallied 28 digs and Molly Huse had 32 assists and an ace.

"It wasn't like they were outplaying us, we were playing with them," Havre coach Stephanie Huse said to 406 Sports. "We were up at times, and then they came back ... honestly, that's kind of how it goes in the Eastern A and how it goes when we see each other at the end of the year. It's wonderful volleyball, it's high-competition volleyball and that's what you want your girls playing."

The loss dropped Havre into this afternoon's loser-out match against either Stevensville or Ronan. If Havre wins, the Ponies advance to tonight's fourth-place match.

Meanwhile, in the Class C State Tournament, Chinook was playing for the first time since 2015, and the Sugarbeeters looked right at home as they knocked off Eastern C champion Circle by scores of 25-17, 20-25, 26-24 and 25-14. Junior Hallie Niebauer led Chinook with 14 kills and 12 blocks. Junior Mya Berreth had 20 assists and 12 digs and sophomore Addison Olsen added another 14 assists. But they had three players with double-digit digs in senior Torin Cecrle (19), senior Bree Swanson (13) and Berreth.

Chinook's thrilling win pushed the Beeters into the quarterfinals Thursday night, but there, they fell to Southern C champion Bridger, by scores of 18-25, 29-31, 25-20, 25-18 and 15-10. The Beeters' heartbreaking loss moved them into the loser-out round this afternoon, where they face either Belt or Roy-Winifred. The winner of that match stays alive and will play for fourth later tonight.