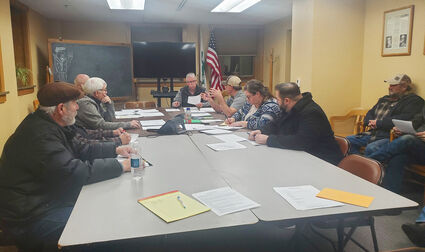 Hill County Park Board Chair Jeff Jensen, back, listens to Beaver Creek Park Board Superintendent Chad Edgar, right of Jensen, speak during a park board meeting Monday in the Timmons Room of Hill County Courthouse.

The Hill County Park Board discussed how to proceed on a number of issues facing Beaver Creek Park including the construction of a new Beaver Lodge, the possible construction of a southern cross fence, park fees and damage caused by beavers.

Board Member Lou Hagener said he sent his fellow board members an analysis of the conditions of the park's southern pasture, which the cross fence aims to increase the health of.

Members of the board and its grazing committee have said the area is being overgrazed and the fence was proposed to reduce that, but at last month's meeting the board decided to send the issue back to the committee which they want to meet with grazers in the area who largely oppose the fence.

At this month's meeting, Hagener said it will likely be a long discussion.

Park Superintendent Chad Edgar said the committee still needs to meet with the grazers in the area to discuss, among other things, possible alternatives.

The board also discussed the passage of a 3 mill levy to pay for a new Camp Kiwanis Beaver Lodge.

Hill County Commissioner Mark Peterson said the levy is estimated to raise $1.9 million over the next 15 years, and the plan at this point is to find a loan to pay for the construction of the new lodge now and use the money raised through the new levy to pay off the loan.

Peterson said he's sent letters to local lenders to gauge their interest, but before any kind of loan can be taken out they need to have a plan for what the lodge will look like along with an estimate of its cost.

He said the whole process will take time and he would be surprised if plans were finished by summer, repeating his oft-said sentiment that "nothing gets done in a year."

Hagener disagreed, saying he thinks if the board really works to make everything happen they might be able to have a plan drawn up early this coming year.

He said, obviously, a committee would need to be formed and public meetings held to get people's input on the project, but he thinks a tentative target date of March 1 should be enough, a timeline Board Chair Jeff Jensen called, "ambitious."

Peterson said first they would need to sit down with Friends of Beaver Creek Park to discuss how and if they can use the funds raised by the organization for the lodge project now that the levy has been approved.

He also said the levy was approved by voters by a very narrow margin, and they should tread carefully with how they spend the money.

"There are still some people questioning whether we should be doing this," he said.

Jensen said he would reach out to local media and see if they can get the word out about the formation of the committee and request application letters from people interest.

During the meeting the board also discussed some recent damage caused by beaver.

Edgar said quite a few trees were taken down by the animals so he tried to get in touch with some trappers to take care of the problem before everything froze.

However, he said, many trappers were busy and he didn't have much luck.

Edgar passed out copies of the park's Beaver Management Plan, but Hagener raised concerns about a section that appears to have been deleted at some point.

He said the policy they passed a year ago had a section explicitly talking about alternatives to beaver trapping, but the copy that had just been passed out appears to have had that section struck.

Edgar asked that the copy Hagener had from a year ago be sent to him so they can get the issue worked out, to which Hagener agreed.

While discussing a recent meeting of their grazing committee the board also talked about how they count cow-calf pairs compared to individual cows when allocating grazing area and time.

The park now counts cow-calf pairs and individual cows equally in terms of the amount of grazing they are expected to do, but Hagener has argued that the pairs should be counted 1.3 units, as opposed to the individual cow's one unit.

The matter was sent to the grazing committee, which Hagener said has more or less determined that they don't have the requisite knowledge to deal with this issue so they sent it back to the board.

Hagener said it is a multi-faceted issue that affects a lot on the park, and he wants to see the matter put on future agendas to the board can discuss it more.

During public comments, Lee Morse said he doesn't think the issue has to be all that complicated at all, suggesting that the board go back to the system he used to see, where a cow-calf pair were counted as 1.3 units, a cow was counted as 1 and a heifer was counted as 0.7.

Morse said it is clearly unfair to count a single cow and a cow-calf pair the same way, but he thinks the matter doesn't need to be that complicated.

He also said he thinks the board should handle the matter instead of the grazing committee because the board isn't exclusively made up of grazers who inherently have a personal economic stake in the matter.

During Edgar's report, he said he would like some help planning the construction of a kiosk at the north end of the park, something the board has been talking about for some time.

He said park usage has been low in the past month but he's hoping they'll get some business from winter sportspeople.

The board also discussed the parks' recreation fees, which they review periodically.

Edgar recommended against making any changes at this time and the board voted unanimously to leave them untouched for now.

At the end of the meeting Hagener also requested that the board at some point request an update on the other Hill County parks under its umbrella.