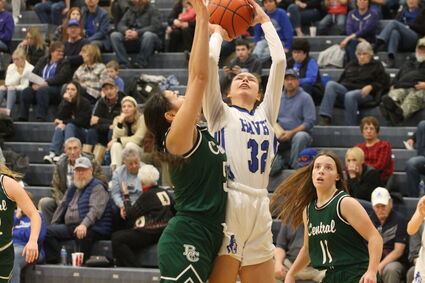 Havre's Tierra Parker shoots the ball against Billings Central at Havre High Gymnasium Saturday. The Rams defeated the Blue Ponies, 62-56, to drop them to 0-2 on the young season.

For the first time since January, the Havre High girls basketball team got back on the court at Havre High Gymnasium with a game against Billings Central this past Saturday. With fans finally getting to watch the Blue Ponies play in person, they were treated to a tough fight between the Ponies and Rams.

The Rams had the lead for most of the night, but the Ponies always battled to keep it close. The Rams ultimately won the game, 62-56, but HHS head coach Dustin Kraske was proud of how his team played on the night.

"I thought we played really hard the last half of the game. I was very ple...