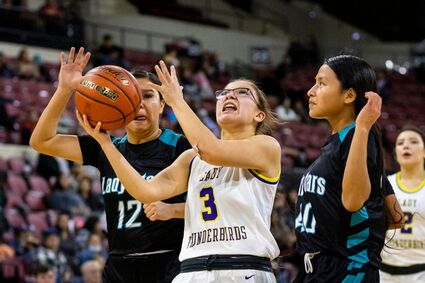 Hays-Lodge Pole's Nina Fox (3) looks to shoot during the Thunderbirds' game against Lame Deer at the All-American Indian Shootout at First Interstate Arena at MetraPark on Friday.

The high school basketball season is here, and the first full weekend of the new season saw Hi-Line teams traveloing to preseason tournaments all over Montana.

Action started on Thursday at the NDN Shootout in Billings, the Box Elder girls opened the season with a 65-16 win over Two Eagle River. Tayleigh Sunchild and Ariel Gopher combined for 25 points for the Bears.

Chinook also opened its season Thursday night with a 70-42 win over Class B Cut Bank at the Shelby Tournamernt. Hallie Neibauer scored 27 points and Bree Swanson chipped in with 15 points as the Sugarbeeters outscored the Wol...