Cold settles on the Hi-Line, warmer later this week 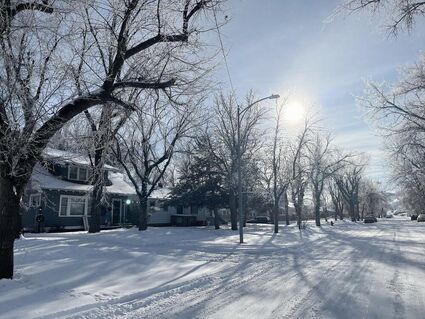 The sun shines down over snow in Havre Friday. Temperatures dropped on the Hi-Line this morning with temperatures running from minus 4 to 4 above, though it was much warmer farther south at Big Sandy, in the southern Bear Paw Mountains and near Hays and Lodge Pole, with Big Sandy at 19 and Hays at at 29.

The cold weather carried over from a mostly cold, snowy December, with temperatures dropping this morning on the Hi-Line to single digits and even below zero with a chilly day expected and warmer weather not really predicted until the weekend.

It was a bit warmer in some spots - National Weather Service listed Big Sandy at about 20 degrees at 10:30 a.m. and it was a relatively balmy 29 near Hays - but Havre was at minus 4 degrees.

That follows a December mostly in the very cold regions, except right at Christmas.

In Havre, for example, Dec. 23 saw the coldest temperature in the state at minus 38, but it warmed to 9 below zero the morning of Dec. 24 and shot to 45 degrees Christmas Day. 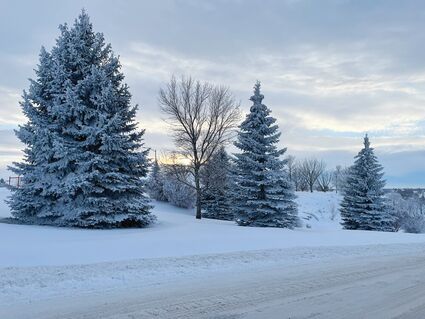 Frost adorns trees along a road Friday. Highs today are expected to mostly be in the single digits in this region, except in the Little Rocky Mountains where they are expected to hit the upper 20s or even 30s. most of this region is expected to be fairly cold this week till the weekend, when they should close in on 30 and even warmer.

And the snow has piled on. Havre saw a record 5.8 inches of snow last Wednesday, with the National Weather Service recording station at the Havre City-County Airport recording 32.7 inches of snow for the month. The normal snowfall for December for Havre is 8.2 inches.

Highs and lows are expected to be a little warmer near Big Sandy, with a forecast of 20 the high for Wednesday with a low of 5 and then a high of 16 Thursday but the high Friday expected to hit 35 degrees.

The southern Bear Paw Mountains also are expected to be warmer, with highs in the 30s or low 20s all week.