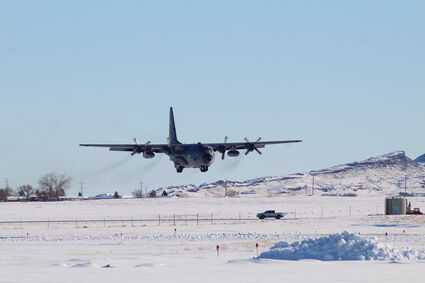 A Montana Air National Guard C-130, with its crew on a training run Wednesday, approaches the Havre City-County Airport for a landing.

Though the C-130 Hercules tactical aircraft that landed at the Havre City-County Airport Wednesday only stayed on the runway about 10 minutes before the flight crew took off again to continue the training run, that historic moment was almost four years in the making.

The C-130 and its crew are part of the Montana Air National Guard wing based in Great Falls, and the aircraft is, as far as airport manager Tony Dolphay can recall, the largest airplane to ever land at the Havre airstrip.

"It's the biggest plane that I know of," said Dolphay, who is also a long-time Havre pilot and owner with...