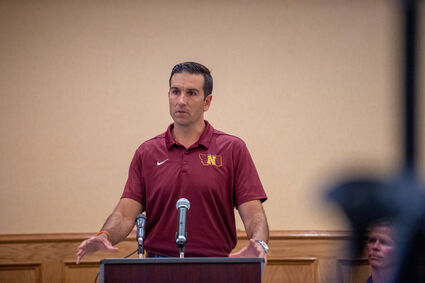 Montana State University-Northern head coach Andrew Rolin speaks to the media at Frontier Conference Football Media Day Tuesday in Great Falls. While Northern was again picked to finish last in both preseason polls, Rolin spoke optimistically about his Lights as they enter their second season under the head coach.

GREAT FALLS - A common sentiment emerged from Frontier Conference Media Days Tuesday in Great Falls and that's the fact that the league is going to be as tough and competitive as ever.

Yet, when the coaches and media released their preseason polls, there was consensus at the top as the College of Idaho was picked to finished atop the league in both polls. Southern Oregon was also the No. 2 choice in each poll followed by Montana Western.