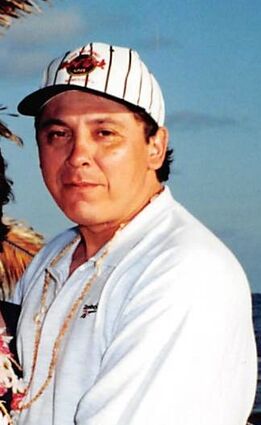 Wake services were held Monday, August 3, and will continue until his funeral service, which will be at 10:00 a.m. Wednesday, August 5, all at St. Anthony's Catholic Church in Box Elder. Burial will follow in the Box Elder Cemetery.

Please visit Frank's online memorial page and leave a message of condolence for his family at http://www.hollandbonine.com .

Frank Gregory Henry was born on June 7, 1963, to Frank and Violet Henry in Havre, Montana. Frank was the youngest of 10 children. Throughout his childhood days he attended Box Elder Schools and later graduated with a building trades degree from Stone Child College.

October 15, 1983, he married the love of his life, Melody Billy, in Rocky Boy, Montana. Together they had three beautiful children, Jeff (Stephanie Bacon), Aaron (Misty Tatsey) and Kaycee (Lane Moran) Henry. He was an amazing father and worked hard to provide the best life for his children.

Frank was a phenomenal grandfather, too. He had four grandchildren, three grandsons Julian, Jeffery Jr., and Stephen Henry and his only granddaughter, Aarianna Henry. He loved his grandchildren more than words could explain and he would do anything for them. He never hesitated to support them when it came to academics, sports, pleasure and rodeo! Frank loved watching his children and grandchildren grow and excel through the years, there was nothing else that made him more proud.

Frank was a hard worker and always went above and beyond in all that he did. He was the type of guy who had a huge heart, but also wasn't afraid to take the lead. Frank taught building trades for over 20 years in his lifetime. He worked as a facility director at Stone Child College and was currently employed at the Rocky Boy Health Center. Frank enjoyed building various projects. You could find him remodeling something, building new decks or working hard to invent a new creation.

Frank was the best father, husband, grandfather and friend that anyone could ask for and a whole lot more. He was a coach, mentor and a father figure to many over the years as well.

Frank was an outstanding athlete all of his life and enjoyed watching all sports. Throughout his years he excelled in basketball, golf, softball and bowling. Golf was still a sport that kept him driving today. Frank was an avid golfer. He was known to be one of the best golfers around. He was often found golfing with the younger guys since all of his older buddies handicap was too high.

Frank enjoyed spending his time surrounded by his family, co-workers and all of his many friends.

He leaves a hole in our hearts, but he also leaves us with many happy memories that we will carry on forever and ever. We will always cherish these memories and share them with those are close to us.

He was preceded in death by his parents, Frank and Violet Henry, and brothers Henry Bud Cobell, Sam Cobell, Bill Cobell and Myron Cobell.