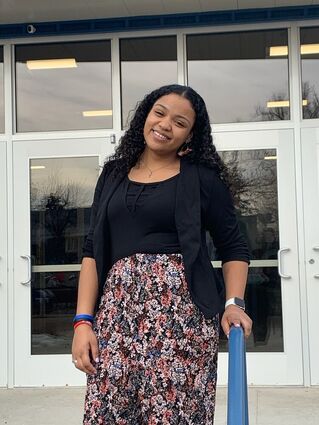 From Boys & Girls Club of the Hi-Line

Havre teenager and outstanding youth Patricia Morsette, who prefers to go by P.J., earned the state's top honor in the Boys & Girls Club's Youth of the Year Program, being named Montana Youth of the Year for 2021.

"I'm so excited! I can't believe it," Morsette said Friday upon receiving news of the award.

The Youth of the Year title is a prestigious honor bestowed upon an exemplary young person in recognition of their outstanding leadership, service, academic excellence and dedication to living a healthy lifestyle.

Candidates are named at a local Club level, which then progress to state and regional competitions before the National Youth of the Year celebration.

The statewide Youth of the Year competition was held virtually this year because of COVID-19.

Morsette, a junior at Havre High School, competed virtually March 5 against teens from other Montana clubs, and, after delivering a memorized three-minute speech about her life and how the club has helped her and then being interviewed by a panel of judges about both her life and club experiences, Morsette was named the Montana Youth of the Year.

"We are so proud of P.J.! She's an impressive young woman and she has an inspiring story," Boys & Girls Club of the Hi-Line Club Director Tim Brurud said. "She is incredibly deserving of this Youth of the Year honor, and we're excited to see how well she'll perform in regionals."

Morsette has been awarded with $4,500 in scholarships as a result of winning Youth of the Year on the local and statewide levels. More scholarship opportunities await Morsette at the regional competition.

Now a junior in high school, Morsette was introduced to the Boys & Girls Club as a shy first grader. Initially the Club and its plethora of activities and kids were overwhelming to Morsette, she said, but after she got used to the Club, she loved it.

"There were always different kids to play with and fun activities going on," Morsette said. "And if you needed a break from all the kids and craziness, then there was always a staff person you could hang out with. They were always so nice and you could tell they really cared for each and every kid."

"Keystone helped me learn to lead, organize things, and be responsible," said Morsette, who has helped plan and put on service activities and fundraisers for Keystone ranging from a blanket and food drive to cleaning up some of garbage from the roadways surrounding Havre.

Morsette has come a long way in her time at the Club. In middle school, she said, she hung out with the wrong crowd, made some bad choices and watched as her group of friends began to disappear - dropping out of school, getting pregnant, or experimenting with drugs and alcohol.

Although it would have been easy to follow that same dark path, Morsette said she fortunately had her mother and stepfather to help her and she began to turn her life around. Morsette's path hasn't been an easy one, but she's determined to make something of her life and hopes to someday aspire others to do the same.

"I've created bonds with some amazing people because of the Club," Morsette said. "My time at the club has helped shape me into someone I never thought I could be. I wouldn't change my club experience for anything."