Mueller: Wants next year as close to normal as possible 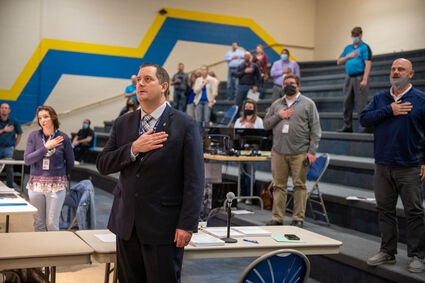 People at the Havre School Board meeeting Tuesday recite the Pledge of Allegiance. The board took numerous actions at the meeting and heard updates including on the situation with COVID-19 and plans to have the next school year as normal as possible, and on plans for graduation ceremonies.

In a series of unanimous votes the Havre Public Schools Board of Trustees canvased the results of the recent school board elections, provided academic excellence awards to students and approved a number of policy updates, as well as discussing the district's policies moving forward.

Superintendent Craig Mueller said in his report to the board that the administration is still working very hard on the kindergarten through fifth grade summer learning program focusing on English and math, and on similar programs for grades six through eight. He said high school students are being encouraged to sign up for summer school classes and Montana Digital Academy is being used for credit recovery as well.

"All of this is being done for a return to school in the fall that will be as close to normal as we can get," he said.

He said he hopes for a return to school in the fall with five-day schedule with the possibility of students continuing to socially distance and wear masks, but only if it is necessary for safety.

Mueller said this has been a very difficult time for students, and for teachers trying to police mask usage, but with the recent uptick in cases and quarantines in the area as well as the arrival of COVID-19 variants in the county, it is still important for administrators to remain vigilant and prioritize the safety of the students in the closing weeks of the school year.

However, he said he wants to make clear that he and his colleagues want to get back to normal as soon as possible.

"I don't want to give the impression that our administrators and our district has ever approached this in a way that we didn't want to come back to school," he said. "That's not what we're in the business to do and it does not speak to work our administrators have had to put in to this year."

Mueller said he wanted to thank the board for their work, making hard decisions during the pandemic while being exposed to passionate arguments from both sides of the conflict.

Mueller announced that graduation will be taking place Sunday, May 30, at 2 p.m., and he is working with Havre High Assistant Principal and Activities Director Brian Kessler and Principal Ed Norman to make arrangements.

He said he's hoping they will be able to hold the event at Blue Pony Stadium but a final decision will be made Friday morning. They are making plans for inclement weather, but he's hoping it will be as good as last year.

Norman said the school is working with Hill County Health Department to make sure everything is safe and socially distanced.

Members also approved a memorandum of understanding between Havre Public schools and the Havre Fastpitch Association.

Mueller said the original was signed in 2004 to form the softball program for Havre High School, and the association paid $25,000 to kick start the program as well as a percentage each year to keep it going, with the understanding that the school itself would take over the cost once it was able.

He believes the district is in a good place to fully fund it now. HPS will still be allowed to access the association's facilities free of charge, however.

The board also approved new curriculum for k-12 math and social studie and 9-12 vocational practical arts.

Mueller said the teams of teachers who worked on this new curriculum worked very hard to identify and fill gaps they recognized in students' educations and he appreciates these efforts which were made on top of teachers' already heavy workloads during the pandemic.

He said the math and social studies curriculums will require new textbooks and supplemental materials to fill the gaps identified by teachers.

Lincoln-McKinley Primary School Principal Holly Bitz also thanked everyone for their work on the new curriculum and said they now conform the the new OPI standards.

Bitz and Mueller said the most notable addition to the social studies curriculum is the inclusion of economics as a subject even at early grade levels.

Mueller said the goal is to instill a degree of financial literacy in students early on and increase their understanding of the larger economy in the U.S. and eventually worldwide.

Bitz said it also includes activities and projects that will expose students to cultures from around the world.

Mueller also talked about the changes to the 9-12 vocational practical arts curriculum which he said seeks to fill gaps in the field of welding, and he's hoping HPS will be able to work with Montana State University-Northern to address that gap before the beginning of the school year in fall.

The board also approved a number of policy updates and replacements on their second readings, the vast majority of which where meant to bring the language in line with new state and federal guidance regarding school policy.

The revisions were to policies about staff health, replacement physical programs, uniform complaint procedure, sexual harassment of students and employees procedures, student discipline, processing of fingerprints and confidential criminal justice information, child abuse and neglect reporting, the implementation of the commercial driver's license drug and alcohol clearing house, and FMLA procedures, all on the second and final reading.

The new policies that were approved dealt with the use of federal Title One funds, and personalized learning opportunities, also on their second and final reading.

Mueller said the latter policy explains personalized learning and transformational learning and will allow for greater flexibility in planning alternative instruction and ensure equality in opportunity for students.

The board also recognized a number of students for their academic excellence, presenting them with certificates proving their outstanding accomplishments, and taking their pictures.

Trustees, parents, and the audience at large applauded the students as their names were announces and they accepted their certificates.

The unofficial results of the school board elections in Havre saw incumbent Lorraine Larson and Jacob Ingram winning three-year terms with 936 votes and 778 votes respectively.

In the race for a one-year term, incumbent Garrit Ophus won with 1,182 votes and Brandon Berreth received 692 votes.

In Tuesday's meeting the board authorized the official results to be published.

Havre Public Schools Superintendent Craig Mueller said he wanted to recognized the service of Board Chair Aileen Couch and Vice-Chair Harvey Capellen, who will be leaving after a combined 35 years of service, with a pair of plaques.

"I've appreciated working with both of you and wish you the best for the future," he said.

Capellen said he wanted to say a few words about his time.

"It has been a true joy to work on this board," Capellen said.

He said there have been good times and trying times but he regrets none of it, and has enjoyed his time working with the administration.

He said he's been involved with the hiring of nearly every administrator in the system during his time and he's never been disappointed by someone the board has approved. 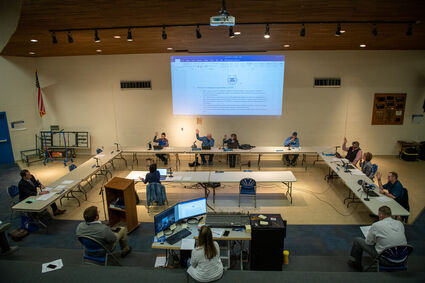 He said he believes he and Couch will have left the district better than they found it and he hopes to continue to be a part of it as a member of the community.

The board approved school calendar year, the 2021-22 trustee meeting and special meeting schedules, but tabled consideration of the 2021-22 trustee activity calendar, board and committee appointments and board member code of ethics until their reorganization meeting May 20 where the new board members will take their seats on the board.

Mueller also said he's hoping to fill some very important positions in the district soon and looks forward to discussing budgets at the board's special meeting May 25.