By Patrick Jonhston and Tim Leeds 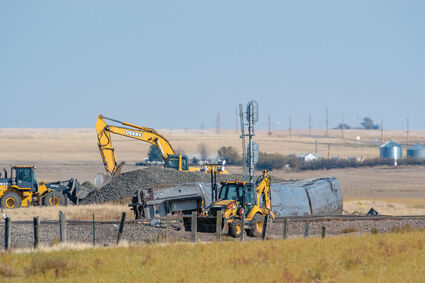 Empire Builder passenger cars lie on the ground near the tracks Sunday after eight cars on a 10-car train derailed west of Joplin Saturday afternoon.

Amtrak reported the westbound train, with two engines and 10 cars, was carrying 141 people and had 16 Amtrak employees on board.

Eight of the cars derailed with some tipping over.

Gov. Greg Gianforte said at a press conference in Chester Sunday afternoon that, at that time, all passengers had been accounted for and had left Chester.

He said all but five of the people injured had been treated and released from the hospitals in Kalispell an...