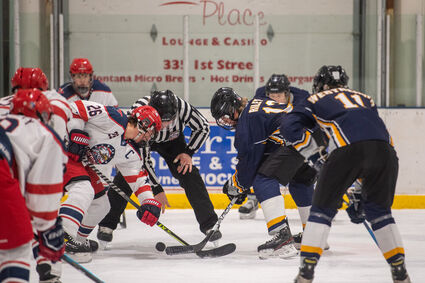 Havre's Trayden Riley, right, faces off against the Great Falls Americans in a high school hockey game Saturday morning at the Havre Ice Dome. The Ice Hawks beat the Americans, both Friday night and again Saturday.

Early on, the Ice Hawks played well in their two wins against the Great Falls Americans. But they ran into a tough Bruins team as they lost two games to end the weekend.

The home stand started Friday night with a 4-1 win over Great Falls. But the Americans struck first just 17 seconds into the game with a goal from Westin Weisenb...