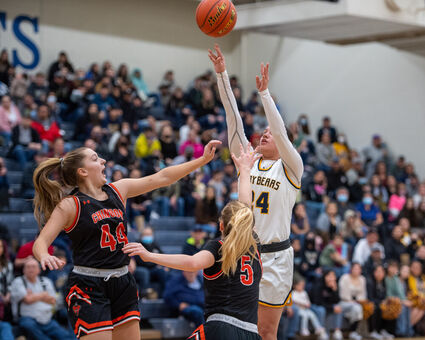 Box Elder's Breanna Bacon shoots over the Chinook defense during last Saturday's District 9C girls championship game. The Bears and the Sugarbeeters are now headed to the Northern C Divisional, which starts Wednesday and runs through Saturday night at the Four Seasons Arena in Great Falls.

The District 9C is arguably the toughest girls basketball district tourney in all of Class C hoops. And if that's the case, then the same can be said for the Northern C Divisional.

Year in and year out, the Northern C boasts the best field in Class C, and this week's tournament in Great Falls will be no different, as the top teams from the 8C, 9C and 10C gather in the Four Seasons Arena starting Wednesday afternoon.

Among those teams will be the three standouts from last weekend's 9C tournament in champion Box Elder (19-1), runner-up Chinook (13-6) and the defending Northern C champion Fort Benton (13-9). And all three teams know just how challenging the next four days in Great Falls will be, but also, that the 9C prepares them all so well.

"I think we're not only in the toughest district in this division, I think we're in the toughest district in the state, and I don't think it's close, quite frankly," new Fort Benton head coach Eddie Fultz said. "I think the top five teams in the district would win most districts across the state or at least in the top two or three. I think anybody that makes it out of this district to divisionals - I think North Star was in that conversation, Hays, Chester and Big Sandy even Turner wasn't that bad a team either - all of us, any of us that make it to the divisionals, are going to have a chance to compete."

The Longhorns are the third-place team from the 9C, though they're the defending Northern C and state champions still. They will play 10C champion Augusta in the first round, after they battled their way to Great Falls, via a thrilling win over Hays-Lodge Pole in the 9C consolation game last Saturday. Injuries have hurt Fort Benton this season, but the Horns, led by Ashlee and Hailee Wang, Cloe Kalanick and others, have really hit their stride as of late. Casha Gorder is another standout for the Horns, who will look to battle the Elks (18-2), a team that has been dominant all year. Led by Payton Levine.

Fort Benton and August will tip off Wednesday night at 8:30 p.m.

The girls tournament begins with Cascade (10-11) and Geraldine-Highwood (15-7) meeting Wednesday at 7 p.m. The upstart Badgers finished third in the 10C last weekend, while the Rivals placed third in the really difficult 10C.

The winner of that game will advance to take on top-seeded Box Elder Thursday at 8:30 p.m. The Bears are in the Northern C for the second straight season, after missing the 2020 divisional tourney. Led by head coach Joel Rosette, star scorers Kyla Momberg and Angela Gopher, and a deep and talented overall roster, Box Elder is one of the heavy favorites to cut down the net this weekend in Great Falls.

As always, the divisional tourney is a wild affair, and the fact that 8C powerhouse Belt (18-3) is on Box Elder's side of the draw makes things even more intriguing. Veteran head coach Jeff Graham's team lost an 8C heartbreaker to Roy-Winifred in the chipper last week, but make no mistake, with Hattie Bumgarner, Kylee Permann and Lindsey Paulson among others, the Huskies are also a big favorite again this week. Belt takes on 10C runner-up Simms in the first round Thursday at 7 p.m. The Tigers (18-3) are a veteran squad led by standout Taylee Sawyer. 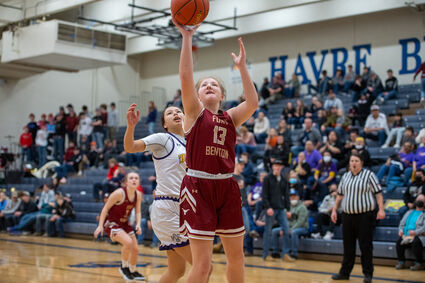 Fort Benton's Kylynn Nack shoots during the 9C girls consolation game last Saturday in Havre. The Longhorns took third at the 9C, which means they get the chance to defend their 2021 Northern C title this week in Great Falls.

On the other side of the draw, the winner of the Fort Benton/Augusta matchup will face either 8C champion Roy-Winifred or the Sugarbeeters. They meet at 12:30 p.m. Thursday, with the Sugarbeeters making a triumphant return to the Northern C after a couple of tough seasons. The Beeters are paced by the high-scoring Hallie Neibauer, but head coach Mike Jones' squad has improved every step of the way this season, and they're ready for the road ahead.

"We come from a really tough district, so I fully expect all three teams that are coming out of this district to compete night in and night out," Jones said. "It's going to be a fun atmosphere."

Roy-Winifred is another favorite this weekend. The Outlaws (18-3) get strong inside play from Maddie Heggem, while Megan Bergum and Laynee Elness afre top scorers as well.

Of course, being a favorite doesn't mean cutting the nets down Saturday night. The Northern C is a four-day gauntlet, with semifinals set for Friday night, the girls consolation Saturday at 7 p.m. and the championship game to follow. A challenge game, if needed, would be played Monday night in Great Falls. The top two teams will advance to the Class C state tourney, which is March 9-12, also in the Four Seasons Arena.