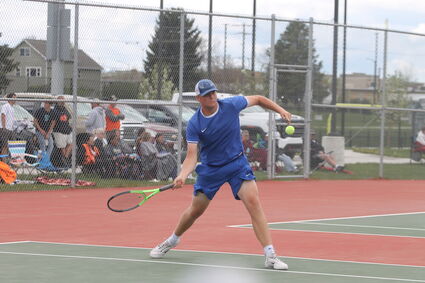 Havre High senior Caleb Spangler hits a forehand during the Class A state tennis tournament back in May in Bozeman. The Blue Pony boys, with Spangler, Trenton Maloughney, Josh Currie, Theron Peterson and Carter Spangler, earned third place at the tourney.

Coming off a state title in 2021, the Havre High boys tennis team was looking to make a splash at state again this past season. While the Blue Ponies did not repeat at the state tournament in Bozeman, they still had a strong showing to finish third, to bring home another state trophy. While expectations were high heading into the season, HHS head coach George Ferguson was happy with how his players gave it their all during the season.

"There were a lot of expectations for this year's team," Ferguson said. "With so many experienced seniors, and coming off a state championship, there was a lot of pressure, maybe even unfairly, on that group. We didn't talk about repeating or any of that throughout the year, we just focused on getting better each and every day like we always do, and those guys did that. Every single one of our guys was a better tennis player at the end of the season, than they were at the beginning, and that's always the goal."

After coming up short at the Northeast A, the HHS boys team performed better at state to bring home their 13th state trophy in the past 19 years. Combined with the HHS girls tennis program, Havre tennis has brought home 18 trophies and seven state championships in the last 19 seasons.

At this past year's state tournament, Josh Currie went on a run to finish second in singles for the second year in a row. With his second-place finish to end his high school career, Currie earned all-state honors for the season.

While Currie was the only Pony to earn all-state honors, Ferguson was proud of his team's efforts in the postseason.

"Going into the postseason, the goal is always to win divisionals first and qualify as many kids as we can to state," he added. "But Miles City had a bit more experience and depth than we did this season, and they got us at divisionals. They were tough and hats off to them. That's only the second time we haven't won divisionals in over 20 years, but at the same time, we qualified a great group for state, and they did really well. Sure, we lost a couple of heartbreakers at state and had those matches gone our way, we might have won it, but, at the end of the day, we brought home a trophy, and that's always a huge accomplishment. So nothing to hang their heads about. It was a great season, and we once again expanded the trophy case and you never take that for granted. So I'm very proud of the team for that."

With another state trophy, the Ponies continued to maintain their status as one of the top programs in the state. Also this past season, more than 40 kids played for the Ponies, which was the highest number for any Class A program once again. With the number of kids on their roster and with the winning culture in place, the Ponies should have many good years ahead of them as a program.

"It was a great year," Ferguson said. "We had so many kids out for the program, and then the older kids, they all did so well, and showed so much leadership. We had a great season, it was a lot of fun, and the kids are just a joy to coach. So I couldn't have been happier with how it all went.

"And I'm looking forward to another great season next year," he continued. "We have so many great kids coming back, the competition in our program is really good, these kids push hard and make each other better. They put in tons of work in the offseason, even in the dead of winter. And I know we'll have even more new kids out next spring, and our program will continue to be very strong, and a lot of fun to be a part of. And it will be a ton of fun to coach them all, and I just can't wait for next March to get here."

Editor's Note: This is the final installment on our series of stories on Havre High teams who earned a Class A state trophy this past school year.