Sponsored event is free to attend 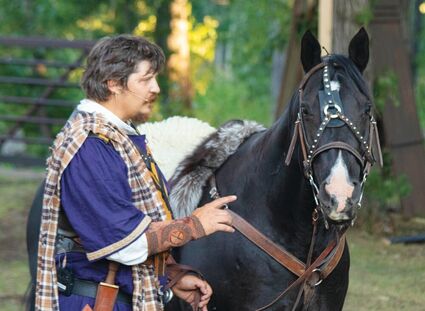 Grant Olson, playing Macbeth, holds the reins of his horse, Magic, as he speaks Tuesday at Lions Campground in Beaver Creek Park during a rehearsal of the Montana Actors' Theatre production of William Shakespeare's "Macbeth."

Editor’s note: This version corrects the name of King Duncan and the character played by Jay Pyette.

Montana Actors' Theatre is bringing a Renaissance-style festival and intrigue, regicide, battles and tragedy from Scotland to Beaver Creek Park this weekend.

The production of William Shakespeare's "Macbeth," along with a multitude of festivities, will be held at Lions Campground Friday through Sunday.

"While the 'fest' is going to be fun for everyone, the real excitement will be the show," said Montana Actors' Theatre Executive Director Jay Pyette, who plays Banquo in the production. "We'd like to point out that people certainly don't need to 'know' Shakespeare in order to follow this show - we've cut it in such a way to really tell the story and 'Macbeth' is fairly simple to follow.

"One very exciting element is that fact that we have a bunch of local riders and their horses in the cast, which makes things like the opening battle scene pretty cool," he added.

Pyette said another exciting part is, aside from the vendors, the entire event is free.

"The show and fest are totally free for the public to attend due to the generosity of our sponsors, King Frank and Queen Bettie Barber of Lloyd," he said, adding the the sponsor "royalty" will be at Saturday's event.

The production is of one of Shakespeare's most highly regarded tragedies. In the play, after Scottish general Macbeth is told by three witches he will become king, he murders King Duncan. The play tells the tale of the turmoil and war that follow.

Pyette said that while it is a three-day event, the primary activities take place on Saturday. 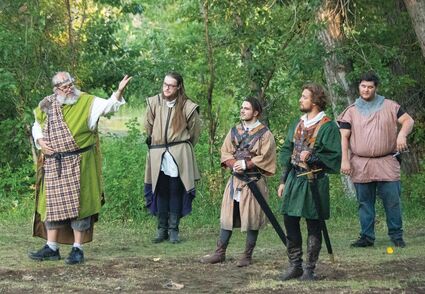 "Friday is what we consider our 'soft opening' with some refreshments and displays which start at 4:30," he said, "but the primary focus is the show at 6 p.m.

"Saturday is a big day starting at 2 p.m.," Pyette continued. "Food, drinks, activities and games, vendors, et cetera, followed by the show at 6 p.m. Finally, Sunday is our 'family day' ... for which we invite people to bring out their own picnic lunches and there will be activities for kids."

Sunday starts at noon with the show at 2 p.m.

Pyette said a multitude of activities will be at the festival.

"Outside of food and drink and vendors, we will have some 'traditional' events including a Maypole, log toss, sword fighting, and other 'feats of strength' for audience members to participate in," he said.

He added that the festival also will have some more contemporary events like cornhole and tarot cards and face painting games and more for children.