Frontier Notebook: Lights have a bye after trip to SFU is called off 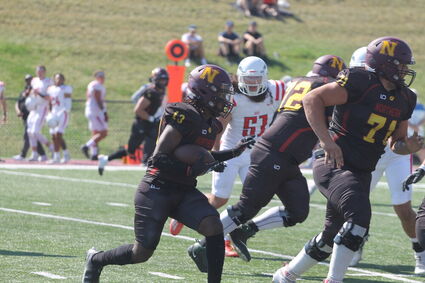 MSU-Northern's Jamari Johnson runs the ball during last weekend's game against Southern Oregon. The Lights, and many other Frontier teams have a bye this Saturday.

And then there were two. Just two weeks into the 2022 Frontier Conference football season, there's just two unbeatens left. And, honestly, that doesn't bode well for the league getting more than one team in the NAIA playoffs this November.

Montana Tech's dominant defensive performance and College of Idaho's hinge win in Billings left the Orediggers and Yotes tied atop the Frontier standings two weeks into the season, while Carroll College and Rocky Mountain College's bid to run the table in the league ended abruptly.

Of course, it is early, and no one has been eliminated from contention, including Montana Western and Southern Oregon, both of which earned bounce back wins last weekend.

Still, the facts that the Frontier has an unbalanced schedule, and the league also has so much parity, will no doubt hinder the conference's ability to earn an at-large berth into the playoffs. For the last several seasons now, only the league's automatic qualifier has participated in the NAIA playoffs, which has just 16 teams.

And this year is tending in the same direction, if only because the league is so good, it's doubtful anyone will go unscathed. And if there isn't an unbeaten champion at the end of it all, it's unlikely the runner-up will be in a high enough position in the standings and the NAIa Top 25, to earn an at-large bid.

In other words, the ultra-competitive Frontier is a blood bath and will continue to be for some time.

Fans of the Montana State University-Northern Lights may have noticed that the Lights are not traveling to play Simon Fraser in British Columbia Saturday. The Lights were supposed to play The Clan in a return trip this season after SFU came to Havre to play Northern last season. However, due to travel issues, that game was canceled back in August, so that gives the Lights a bye this week, which will be one of two bye weeks for Northern this fall.

However, not everyone has Saturday off. Western will play a huge non-conference game against Dickinson State Saturday afternoon in Dillon. The matchup is a Top 25 showdown with the Blue Hawks ranked 16th and 2-0 on the season, while the Dawgs are ranked 17th at 1-1.