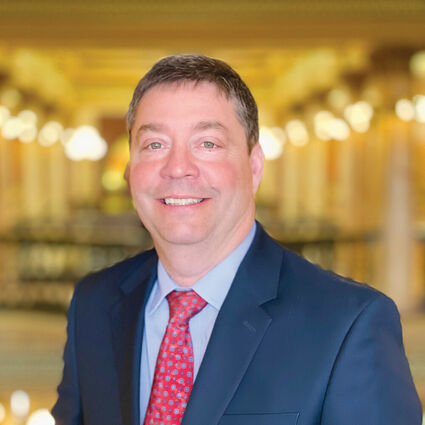 Montana Department of Livestock Brands Enforcement Division Administrator Jay Bodner poses for a photograph. Bodner has been named the 2022 Outstanding Agricultural Leader on behalf of Montana State University's College of Agriculture and Montana Agricultural Experiment Station. He will be honored at breakfast to be held at 10:30 a.m. Saturday, Oct. 22, during the college's annual Celebrate Agriculture Weekend Oct. 21 and 22.

The public is invited to honor Bodner at a breakfast to be held at 10:30 a.m. Saturday, Oct. 22, during the college's annual Celebrate Agriculture Weekend Oct. 21 and 22.

The award is given annually to individuals or couples who are engaged and well-respected in the state's agricultural community. Recipients are those who have impacted many people with their accomplishments, have a lifetime of achievement in agriculture, are industry leaders or innovative producers and are actively involved in the agricultural community.

"We are thrilled to honor Jay as this year's Outstanding Agricultural Leader," said Sreekala Bajwa, MSU's vice president of agriculture and dean of the College of Agriculture. "Jay embodies everything this award stands for. Through two decades of work with key associations in the state and lobbying, Jay strives to help the cattle industry thrive and continues to play a crucial role in the state's economy and beyond."

Bodner was nominated by numerous individuals and organizations, including the Montana Stockgrowers Association, National Cattlemen's Beef Association and Montana Department of Livestock. He has been described as someone who works with everyone from local, state and federal officials to ranchers and industry leaders and has a proven record of impacting agricultural policy for over two decades. Bodner is revered as an individual who serves cattle producers with dedication, passion and collaboration, according to his nominators.

"This is certainly a surprise. When I look at the list of past winners of this award and can now be in that category is very special and very much an honor," Bodner said.

As executive vice president of the Montana Stockgrowers Association, Bodner worked on policy and natural resources with an additional focus on organizational effectiveness. He was engaged in issues most heavily impacting the agriculture industry, such as the "Waters of the United States" portion of the Clean Water Act, the Confederated Salish and Kootenai Tribes Compact, market transparency, tax relief and trade issues.

In one nomination letter, Bodner is described as someone whose view of the cattle industry is more than just ensuring the needs of Montana producers.

As an example, Bodner does a lot of work regarding brucellosis in cattle, an infectious disease caused by bacteria that spreads rapidly from infected animals. He has worked with state agencies, the National Park Service, U.S. Department of Agriculture, U.S. Congress and other groups to bring awareness to the disease and help find better ways to manage it.

"Jay also understands the national and global view of cattle and beef production," the letter continues. "I find this to be a rare trait in our industry, so this just further solidifies Jay's role as a national agricultural leader."

Outside of his work with the Montana Department of Livestock, Bodner is involved in his community as well as his family's ranch near Raynesford. Along with his brother, John, the family continues to run cattle and operate the fourth-generation ranch. Bodner was a 4-H program leader for many years, coached youth sports teams, helped develop a community park for a local school and more.

"I certainly think it's important to be a good community servant," Bodner said. "Everybody is busy in their lives, but if you can take a little time to provide for your community, that goes a long way."

"I have tremendous respect for Jay, and I know firsthand how his leadership and engagement has protected the rights of cattle producers in Montana and across the United States," read one nomination letter. "He is a true ambassador for Montana, and his ability to identify problems and craft solutions has made him an influencer whose knowledge is sought out by others. I have no reservation in saying that the U.S. cattle industry is better because of Jay Bodner's leadership and engagement."