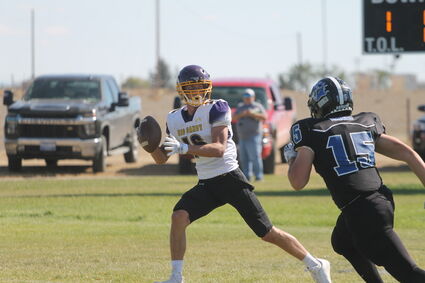 Big Sandy's Kody Strutz scrambles with the ball against the North Star Knights in Rudyard this past weekend. Strutz has been one of the top players on an undefeated Big Sandy six-man football team that has aspirations of a state title this season.

The Big Sandy six-man football team has been on a roll this year. The Pioneers have gone 5-0 with an average margin of victory of 52.6 points a game. A key player for the Pioneers has been senior Kody Strutz who plays wide receiver and safety. With their strong start to the year, Strutz has high aspirations for what he and the Pioneers can accomplish this year.