Part of proceeds benefit Montana Association of Chiefs of Police 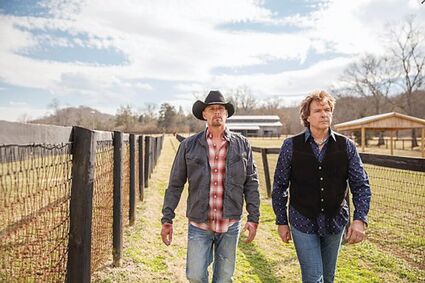 Dave Robbins and Henry Paul of BlackHawk walk down a lane. BlackHawk is performing at the Great Northern Fairgrounds Thursday. Part of the proceeds will benefit the Montana Association of Chiefs of Police.

Popular country music band BlackHawk will be playing a concert at the Great Northern Fairgrounds Thursday at 7 p.m. in the Bigger Better Barn, with part of the proceeds going to the Montana Association of Chiefs of Police to fund their activities throughout the coming year.

BlackHawk lead vocalist Henry Paul said in an interview Tuesday that he's happy for the opportunity to play in Havre, along with other Montana locations, during this year's tour.

"It'll be pretty exciting to get up there," Paul said.

He said the band will play their hits as always, but they'll be pulling from all corn...