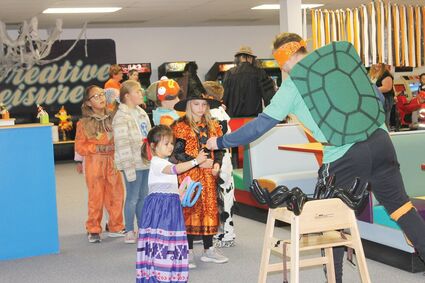 Children participate in a game at Creative Yogurt Thursday during the Havre Roraty Club's Halloween party the club put on for Lincoln-McKinley Primary School students and their families.

The Havre Rotary Club treated Lincoln-McKinley Primary School students to a night of pizza, games and prizes Thursday at Creative Yogurt, a yearly event for the club which appears to have been their most successful in years.

Club President Dawn Ward said it was a great night and she was told by many people that it was better than they'd seen in some time.

"Everything went fantastic," Ward said. " ... It was a great night for everybody."

This is something the club does every year, she said, but they haven't done it for the last two years because of the COVID-19 pandemic, so she's glad the...