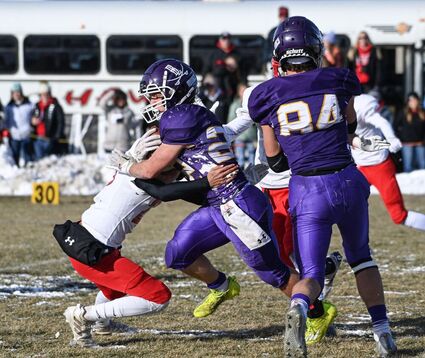 This weekend, the Broadview-Lavina Pirates will face Big Sandy in the Six-Man football state championship game. The Pirates have had an excellent season as they are undefeated and just defeated defending state champion Froid-Lake in the semifinals.

The Pirates will be a tough opponent this weekend for the Pioneers. In the regular season, the Pirates went 8-0 to earn the Southern No. 1 seed in the Six-Man playoffs. The Pirates did face some adversity over the course of the year as some players suffered injuries. However, Broadview-Lavina head coach Brian Heiken believes the Pirates were better suited to overcome it this season.

“Unlike in years past, we have enough depth this year to have some guys step up and really fill the holes and do a great job,” Heiken said. “Since then, we’ve been pretty healthy on our playoff run and the boys just keep putting up good games.”

The Pirates dominated most of their competition throughout the season. They started the year with a 55-0 win over Twin Bridges and then a 52-6 win over defending state champion Froid-Lake.

The Pirates did have some battles over their next two games, but they went on to defeat Bridger, 37-34, and Shields Valley, 34-26, to remain undefeated on the season. Then, over the last four games of the regular season, the Pirates dominated as they won those games by an average margin of 49.8 points a game. With the success they had, Heiken credited his seniors for leading the way.

“It’s just our leadership. We’ve got a big set of seniors and they’ve been our leaders all year long,” Heiken said. “When stuff isn’t looking good or isn’t going our way, they can be vocal and just by example, turn things around.”

The Pirates continued their strong play to start the postseason. They opened the playoffs with a 55-12 win over North Star before defeating Roy-Winifred, 47-29, in the quarterfinals. Then in the semifinals, the Pirates had a battle against Froid-Lake. It was a tough game against the defending state champion, but the Pirates won, 35-34, to advance to the state title game. While it was the closest game the Pirates have had all year, Heiken believes it will make his team battle hardened.

“It does a ton for their confidence,” Heiken said. “They can just know that when it’s not going well all the time, they can get it turned around and get it done.”

The Pirates have many players that can give the Pioneers trouble this Saturday. Cade Erickson leads the offense at quarterback while Hank Tuszynki and Connor Glennie should make an impact at running back. Jace Jensen and William Sanguins can both make plays with the ball and block for their teammates.

Like the Pirates, the Pioneers are undefeated this season and have dominated most of their competition. With neither team looking to earn their first loss this weekend in the title game, Heiken expects an exciting and hard-fought game to capture the state title.

“It’s going to be a tough game. We know that Big Sandy’s got a heck of a team and they’re undefeated just like us,” Heiken said. “They’re going to have a lot of size and a lot of speed but I think we can match up with them fairly well. We’re going to have to have a mistake-free game and then hopefully, the ball will bounce our way once in a while.”

Broadview-Lavina and Big Sandy will kick off the Six-Man Football championship this Saturday at noon in Big Sandy.