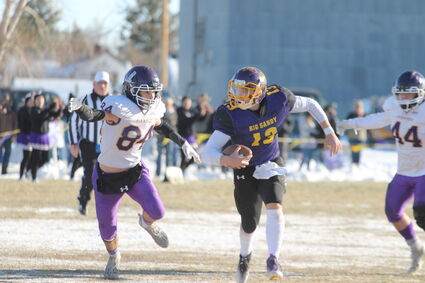 After four straight appearances in the semifinals in the postseason, Braydon Cline and the Big Sandy Six-Man football team finally won a state championship after defeating Broadview-Lavina, 67-27, at home on Saturday.

The Big Sandy Six-Man football team finally did it. After four straight trips to the semifinals, the Pioneers finished the job as they defeated Broadview-Lavina, 67-27, at home to win their first Six-Man football state championship in program history.

"To win by that many points and play such a good game as a team, it's amazing and unreal," senior Rusty Gasvoda said about winning a state championship. "All the hard work we put in, it paid off huge."

"I'm so proud of the boys. They worked hard all year," senior Braydon Cline said. "I wouldn't play with a different team. It's awesome playing...