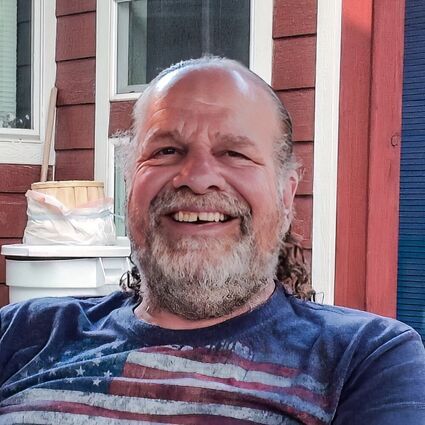 STEVENSVILLE - Robert John Garding of Stevensville passed away November 20, 2022, at St. Patrick's Hospital in Missoula, a few days following a tragic accident. Rob was surrounded by many loving family members up to his final moments. His life-long concern for others extended past his death, with his donated organs going to benefit some lucky recipients.

Rob was born in Havre, MT to Adolph and Fern (Nefzger) Garding on January 22, 1957. His family owned Gardings Campground southeast of Havre where he grew up with four brothers. Rob spent his early years roaming the hills of Havre, sledding, biking, and mostly skirting trouble. He graduated from Havre High School in 1975, but his real high school achievement was to join his first rock and roll band where his afro earned him the name "Hair Bear." School ended, but his love of performing never did; he played bass and guitar, sang, and wrote music in a continuous string of bands throughout his life.

In 1983, he married his soul mate and love of his life, Lori Webber. Lori came into the marriage with two children, Kina and Quintin Brayton, and Rob never wavered from being their father. Two more beloved daughters soon came along, Chyrel and Katie. Grandson Carson (their son-son) eventually joined the family as well.

They lived in Missoula until moving to Stevensville in 1996 when they purchased their first NAPA Auto Parts store. Rob became an integral part of this small community as an honest and well-respected business owner who was always ready to help anyone in need. He was a supporter of local businesses and donated to various school and community programs.

Rob had a smile that could light up a room. When he spoke, people listened. During his life, Rob was the epitome of humility and kindness. He worked hard his entire life to give his family a perfect life. He was supportive and always thought of his family first. The family spent many summers boating, jet-skiing, and bonding on the water. Rob and Lori took vacations every year and often invited the rest of the family to join them. Rob was a devoted husband, and a loving father, brother, grandfather, and great-grandfather. He is not replaceable, and his joy will live on forever in the lives of everyone who knew him.

Rob was a warrior for justice. He actively worked to make this world better and safer for the next generation and believed staunchly in doing what was right. His beliefs and ideals were something each of us could try a little harder to achieve.

Rob is preceded in death by his parents, Adolph and Fern Garding; brothers, Richard, Patrick and Jerry; and sister, Shirley.

Rob's legacy lives on in the family he cherished so much. His heart was full, and he knew he was loved and needed.

The family would like to recognize the wonderful care that Rob received from the ICU staff at St. Patrick Hospital, specifically his nurses, Cassidy and Kail. Their kindnesses will not be forgotten.

A memorial service will be held Friday, November 25, 2022, at Stevensville Elementary School Gymnasium at 11:00 a.m.

In lieu of flowers, the family suggests donating to the Montana Innocence Project, a cause that was near and dear to Rob's heart.

Condolences and memories may be shared with the family at https://www.whitesittfuneralhome.com .