A play goes wrong on purpose at MAT

'The Play That Goes Wrong' opens Friday in Little Theatre 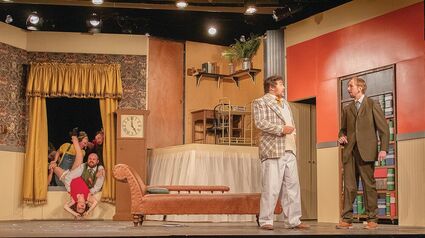 Members of the cast of the Montana Actors' Theatre production of "The Play That Goes Wrong" rehearse a scene Wednesday in Montana State University-Northern's Little Theatre.

The troupe's production of "The Play That Went Wrong" by Henry Lewis, Jonathan Sayer, and Henry Shields opens at 8 p.m. Friday in The Little Theatre in Montana State University-Northern's Cowan Hall.

"This comedy is guaranteed to leave you aching with laughter," MAT said in a release about the production.

The play tells the story of a university drama society's latest production, "The Murder at Havrersham Manor," where virtually anything that can go badly in a theater prod...