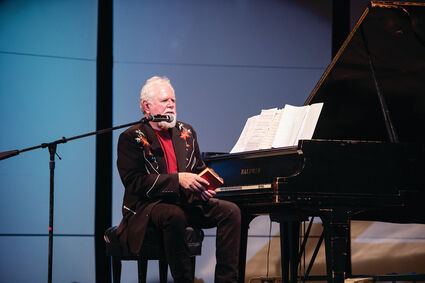 Pianist Philip Aaberg talks to the audience Dec. 15, 2021, during a concert in the Havre HIgh School auditorium. Hi-Line Arts Council is again sponsoring Aaberg's Christmas from the Hi-Line Concert, starting tonight in the high school auditorium at 7 p.m.

Back by popular demand, the Hi-Line Arts Council announced it is sponsoring a live holiday concert with renowned pianist Philip Aaberg tonight at 7 p.m. in the Havre High School Auditorium.

Aaberg is a Chester native who has received both Grammy and Emmy nominations and is Harvard educated. Christmas from the Hi-Line will be a high-energy, high-spirited concert that evokes the vastness and grandeur of Montana through music.

"I am so pleased to bring a little bit of Christmas cheer to Havre," Aaberg said. "I have been giving solo piano Christmas concerts for 36 years and it's one of my favorite things to do. The holiday season brings out the best in people, so let's celebrate the spirit of the Hi-Line and enjoy the season."

Aaberg is known worldwide for his compositions that evoke the spaciousness and beauty of the Western landscape.

It was his mother who first noticed her son's musical talent early on. He began playing music at age 4. By the time he was 15, he traveled on the train 12 hours one-way every two weeks from Chester to Spokane, Washington, to study with Margaret Saunders Ott, a Julliard-trained pianist and teacher who was chair of the piano department at Whitmorth College.

Aaberg displayed an eclectic taste in music and, along with the piano, he played drums and organ in a garage rock band that he and his brother started while in high school. He also played in symphonies across Montana before heading off to college.

After graduating from Harvard, Aaberg later moved to San Francisco, California, to make pop and rock records. He played solo and in small combos in San Francisco blues clubs until joining the Elvin Bishop Group in 1973. He first appeared on the national scene as keyboardist with The Elvin Bishop Band. He toured with the band for four years and played on several of their albums.

Aaberg later toured with Peter Gabriel and recorded with the Doobie Brothers, Kenny Rogers and Vince Gill. He began composing his own music seriously in 1985. Shortly after, he signed with Windham Hill Records and released the influential and critically applauded solo album "High Plains," which garnered him international acclaim.

His second album, "Live from Montana," earned Aaberg a Grammy nomination for Best New Age Album in 2002. It was recorded in the Chester High School gymnasium, where Aaberg played basketball years before. Shortly afterward, he moved back to Chester for good with his wife, Patty, and their son, Jake, to form his own label, Sweetgrass Music, named for the hills north of his hometown.

Aaberg has played with the Boston Pops, participated in the Marlboro Chamber Music Festival, premiered contemporary compositions with the Paul Dresher Ensemble, and performed on more than 200 albums and on PBS' "All-American Jazz," which also earned him an Emmy nomination. Another Emmy nomination followed in 2008, for his soundtrack for "Class C: The Only Game in Town," produced by Montana PBS.

Aaberg has been the recipient of numerous awards and honors throughout his career, including the Montana Governor's Award for the Arts, Montana Arts Council Artists Innovation Award, an honorary doctorate in music from Montana State University in 2013, the Montana Governor's Humanities Award, and he was named Montana's Treasured Artist in 2016.

Admission to the "Christmas from the Hi-Line" concert is $15 for adults, $10 for students/seniors/military and $5 for children younger than 12. Tickets are available at the door, online at https://hilineartscouncil.org or at the following outlets: Havre Area Chamber of Commerce, The Computer Center, Pratt & Company Apparel and Bear Paw Meats.

"The Arts Council is honored to welcome Phil Aaberg back to the Hi-Line to put all of us in the Christmas spirit. This will be an exciting, family-friendly event to help usher in the holiday season," Hi-Line Arts Council President Grant Olson said. "December is full of holiday traditions and we certainly hope 'Christmas from the Hi-Line' is on everyone's schedule."