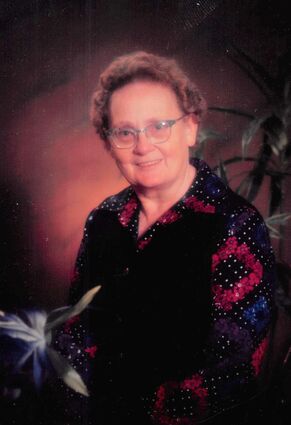 Private family graveside services will be held in the near future, and a public memorial service will be held next spring.

Please visit Dorelda's online memorial page to send a card or leave a message of condolence for her family at http://www.hollandbonine.com .

Dorelda was born on January 15, 1928, in Olympia, WA, to Harold and Dorothy (Wallace) Nelson. She was raised in Washington, graduating from Castle Rock High School in 1945.

Dorelda attended Cascade College in Portland, Oregon, for the next year, and moved to Lohman, MT, during the summer of 1946. In March of 1947, she married Howard Stevens, and the couple made their home in Havre where they raised their five children. There, Dorelda worked in the shipping and receiving department at Buttreys for 20 years, and as a ticket clerk for Amtrak for over 11 years. Howard passed away early in 1987, and she retired in 1988.

Dorelda enjoyed reading and traveling with her son Harold. She loved music, singing and playing the piano, violin and accordion. She was a member of the Havre Assembly of God Church.

She was preceded in death by her son Thomas Stevens; husband, Howard Stevens; parents, Harold and Dorothy Nelson, and sisters, DonnaLou VanBuren and Muriel Berger.