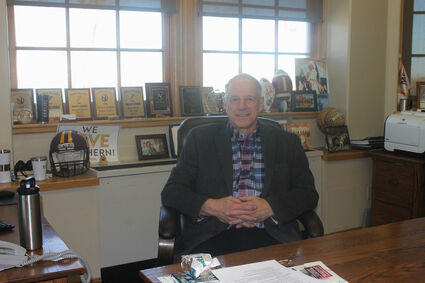 Montana State University-Northern Chancellor Greg Kegel sits in his office Wednesday. Kegel talked about his plans for Northern including continued work on the Aurora Complex and the equine center, and long-term plans to strengthen programs and increase enrollment at the university.

Montana State University-Northern Chancellor Greg Kegel in an interview this week provided details about ongoing projects on campus as well as his vision for the short- and long-term future goals for the university.

As for the upcoming six months, Kegel said, the students will be returning to campus next week and faculty are preparing for their return.

"Spring is always an exciting time on campus," he said.

Kegel said they don't take a census of students until later this month, but based on their projections enrollment looks set to increase again this semester, much like in the fall, which is great news.

He said increasing enrollment continues to be among his highest priorities as chancellor and ongoing building projects like the Aurora Complex, a large recreation center for students, and an equine center for the study of horses are sure to bring more students to the campus.

He said the equine center, along with the education program that will come with it, recently announced its capital campaign at last year's Cowboy Christmas fundraiser, which was a huge success this year and he's excited to continue work on the center.

Kegel said they haven't made specific requests for funds as they want the conceptual plans for the building, which would be usable by the community as well as the students, to crystalize but this semester is when serious discussions will start happening.

However, he said, the Aurora Complex remains his No. 1 priority in terms of ongoing projects and he's working with the members of the area's legislative delegation, who are all on board with getting it funded.

As for the coming session, he said he's glad the state is looking at increasing pay for faculty, which will help people deal with the ongoing inflation issue, but otherwise there's nothing going on at the Legislature that is commanding his attention, at least for now.

He said he's been talking with Montana Actors' Theatre and they were interested in having a black box theater in the complex, which he's completely on board with and excited to see.

On the curriculum side, he said, faculty are working on a number of proposals he's excited to see, like adding more business management course work to their automotive program, as well as some refinements to their industrial technology programs.

He said this is part of the reason he is so focused on increasing enrollment, to meet the increasing demand of industry for highly qualified graduates.

He also said student engagement is a big part of attracting more people and he's very happy to have an extremely proactive Dean of Students in Corey Kopp who has been working with student government and the Student Engagement Committee to improve and set up new activities on campus.

He said Northern and the surrounding community have a lot going on and he always wants students to get out there and participate because they become better and happier students.

"They do better, they're more successful and they end up being more employable," he said.

As for the further future, he said, he is thinking about the possibility of a name change for the campus at some point in the future, though he said such a change would be a very involved process involving a lot of listening sessions before going to the Board of Regents.

"That's way out there (in the future)," Kegel said.

He said Montana Technological University did something similar in the past and he's thinking about something in the vein.

He said it's possible that changing the campus' name to something that calls more attention to the campus' strengths might make it more eye-catching and draw in more students which would ultimately be the goal.

He also talked about his vision for the evolution of the campus' existing programs and campus, saying he wanted to assure people that he doesn't intend to try to realign resources from one program to another, but to bolster the programs they already have.

Kegel said Northern's greatest strengths are in their four-year STEM programs, but everything from nursing to fine arts to education is important and he wants to find ways to improve all of them, and he has absolutely no intention of letting the campus become a two-year school.

"We're going to be bigger and better with what we have," he said, "... This is a four-year university, and it always will be."

He said not a lot of people realize that Northern does all the related training for the Montana Department of Labor and they want people to know about the kind of things they do.

Kegel also reflected on the past few years on campus, which he said were pretty rough due to the COVID-19 pandemic, though he was happy to say it finally seems like life is returning to normal on campus.

He said the pandemic forced the campus to make a lot of changes in terms of how they teach and the platforms they use to deliver that education, but it's a relief that that is now an option they can use rather than a requirement.

"The point of a university is to bring people together," he said. "... It's the reason we're all here."

He said the experience of the pandemic was harrowing and he's certainly not looking to experience it again, but seeing the level of success the students and faculty found despite the harsh circumstances did make him happy.

Kegel said he hated having to cancel events, and the atmosphere of stress and fear of what would come next was difficult to handle, but the campus was pretty unified in its support for mitigation efforts and the students and staff were receptive despite the division in much of the U.S. over pandemic response.

"Not that it was perfect, not that there weren't complications, but I think we did a very good job," he said.

He said the campus didn't see nearly as much contention as local public schools did over pandemic response and that's because the dynamic of a university like theirs is very different.

Kegel said because university students are more independent and largely interact with the campus directly, instead of through their families, there's a lot more direct communication and a lot less contention creating a completely different dynamic, one that was easier to handle in this case.