Ponies look to mine gold in Butte 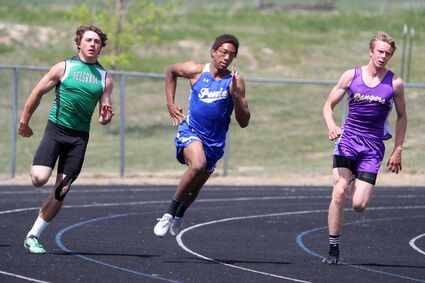 Havre High freshman Mike Loftus, right, rounds the turn during the Central A 200-meter finals last weekend in Havre. Loftus and the Blue Pony boys will look for plenty of points at Friday-Saturday's Class A state track meet in Butte.

Last weekend at the Central A divisional track meet in Havre, the Havre Blue Ponies’ lack of numbers proved to put the program at a disadvantage in the team standings. But that doesn’t mean the Ponies don’t have standout individuals.

In fact, the Ponies do have quality athletes, and those individuals will be on display this weekend for one final track meet as they attempt to finish strong among the best of the best.

The pool of team talent is deep, just as it is every season.

Whitefish won the team title on the boys side last season, as did Corvallis for the girls. But teams like Sidney, Billings Central, Dillon, Laurel, Belgrade and Hamilton will also make a push for top finishes. Programs like the Ponies’, as well as Glendive, Frenchtown, Lewistown, Columbia Falls, Polson, Livingston, Miles City, Stevensville, Browning, Butte Central and Anaconda’s will also bring talented individuals.

Last year the Ponies had just two individuals place in the top six at the state meet. Peyton Filius took sixth in the 800 meters with a time of 2:24. 37 and Martha Stocker took third in the shot put with a throw of more than 37-6. This season the Ponies will look to build off of that success with a large group of young and experienced individuals.

Lacey Waid is a strong favorite to win an individual title in the pole vault this season. The senior vaulter has set a new HHS record this season at 10-6, but has potential to clear 11-0 and maybe even more.

The HHS boys will also face an uphill battle over the next several days.

And just like the girls, some Blue Pony boys also have a shot at earning points in the pole vault. Thomas Gruber has been outstanding this season, and is coming off a 13-6 weekend at divisionals. Gunnar Aageson could also perform well if he can match his best of 12-6. 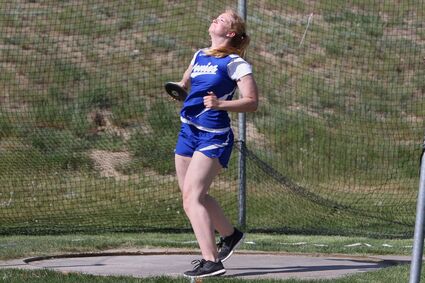 Havre High senior Martha Stocker throws the discus during last weekend's Central A Divisional in Havre. Stocker will hope to get on the medal stand in that event for the second year in a row. The HHS girls attend the Class A state meet Friday-Saturday in Butte.

“We have the talent to score points this weekend,” Ita said. “If Lacey Waid and our other vaulters can get in there and compete, and if some of our middle distance kids can sneak in there and perform for one more weekend, then we should be able to compete and score some points. But we know it is going to be tough for everybody, the competition is always great at the state meet and it’s not easy to place.”

Friday and Saturday the Ponies will join the rest of the Class A at Bulldog Memorial Stadium in Butte for the state meet.