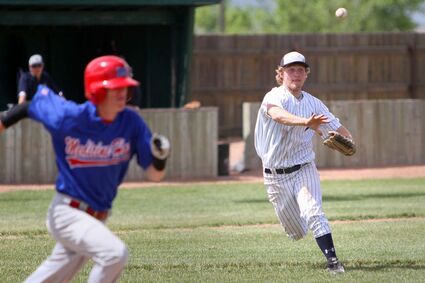 Havre third baseman Gavin Gunderson throws out a Medicine Hat runner during game one of Sunday's American Legion, Northern District doublheader between the North Stars and Knights at Legion Field.

When two teams are as evenly matched on the baseball diamond as the Havre North Stars and Medicine Hat Knights were, the difference between winning and losing can come down to just one or two runs, or key plays.

That was the case Sunday at Legion Field in Havre when the North Stars hosted the Knights for a Northern District doubleheader. The Knights took game one with a final score of 5-4. But the North Stars bounced back nicely in game two, and took the nightcap 5-4. The home split brings the North Stars’ overall record to 3-5, while they are now 2-2 in the district standings.