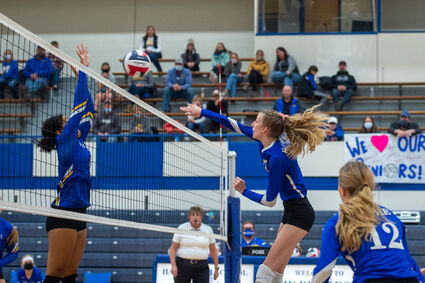 Blue Pony Maddie Columbus, right, takes a shot during a match against Lewistown last Saturday night in Havre. The Blue Ponies are home again tonight when they host the Malta M-Ettes in a non-conference match in the HHS gymnasium.

After an exciting win Saturday night, the Havre High volleyball team is right back in the Blue Pony Corral.

Tonight, the Blue Ponies host the Malta M-Ettes in a non-conference match. It’s the second meeting between Havre and Malta. The Ponies beat the M-Ettes in their season-opener last month in Malta.

Havre has been on a roll as of late, winning three straight matchers, including a five-set thriller over Lewistown last Saturday. The Ponies are currently 7-3 this season, and are in second place in the Northeast A standings.