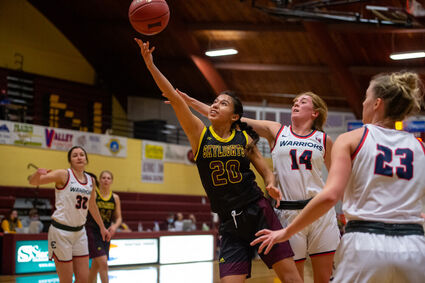 Montana State University-Northern freshman L'Tia Lawrence scoops a shot during last Saturday's game against Lewis-Clark State in the Armory Gymnasium. The Skylights have played former Frontier Conference rival LC State three times this season, but they haven't been able to play an official Frontier game yet. The Northern men and women are next slated to play Dec. 4-5 against Carroll College.

The Frontier Conference was already supposed to have played 20 games around the league before Christmas break. Because of the coronavirus, however, the league has played just two men's and four women's games to this point.

Yes, it's not just NCAA programs at massive campuses and in metropolitan areas that are having trouble playing games right now. It's everybody, right down to NAIA schools in Montana.

Of course, the effects of COVID-19 have been felt at Montana State University-Northern, too. The Lights and Skylights had their league openers at Rocky Mountain College, which were slated t...