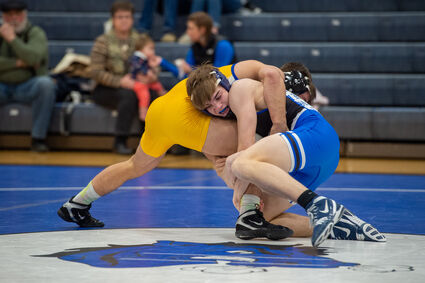 Havre's Riley Pleninger, right, wrestles a Lewistown rival during a Eastern A dual earlier this month in Havre. The Blue Ponies will meet the rest of the conference at this weekend's Eastern A Divisional, which runs Friday and Saturday in Sidney.

The Havre High wrestling team begins its postseason as the Blue Ponies head to the Eastern A Divisional at Sidney this Friday and Saturday. Havre will compete with the nine other teams from the Eastern A: Sidney, Lewistown, Miles City, Glendive, Hardin, Billings Central, Livingston, Laurel and Lockwood.