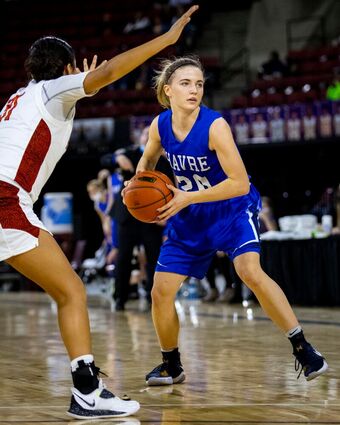 Avery Carlson handles the ball during Havre's semifinal win over Hardin at the Eastern A Friday afternoon in Billings.

The Havre High girls had a thrilling comeback win over Hardin in the Eastern A semifinals Friday afternoon in Billings. That sets up a game with top-ranked Billings Central Saturday in the Eastern A championship on Saturday. The win over the Bulldogs also clinched a spot in the state tournament for the Ponies. Meanwhile, at the Northern C, Box Elder stunned Belt by one point to reach Saturday's consolation game against Roy-Winifred. The win means all three 9C girls teams are still alive, and guarentees at least one 9C team is headed to state. North Star and Fort Benton play in the champions...