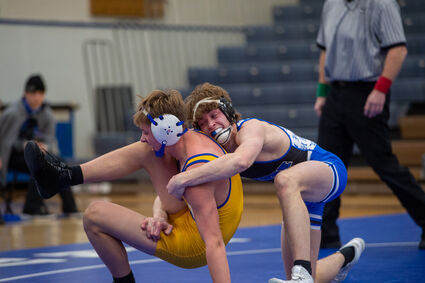 Havre High's Kendall Pleninger, right, wrestles a Lewistown rival during a regular season dual in Havre last month. Pleninger and the Blue Ponies are competing at this weekend's Class A state tournament in Miles City. Normally, the state tournament is held in February as an All-Class event in Billings, but because of the coronavirus, state was split into three different sites with Miles City bidding on Class A.

It won't be the First Interstate Bank Arena. It won't even be in Billings. But the Class A state wrestling tournament will still be a barn-burner, and eight Havre Blue Ponies are excited to be a part of it.

Here's a breakdown of each Havre wrestler's state