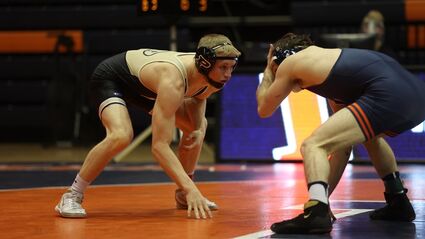 Former Havre Blue Pony great Parker Filius, left, finished fifth at the Big Ten Championships last weekend at Penn State. Filius has now qualified for the NCAA national tournament two years in a row, though last season was canceled because of the coronavirus.

Former Havre Blue Pony Parker Filius qualified for the NCAA national tournament for the second time in his Purdue career. However, this year, he'll actually get to wrestle on the big stage.

On Sunday, Filius won his 149-pound blood round match at the Big Ten Championships in State College, Pennsylvania to advance to his first NCAA national tournament.

To qualify, Filius had to beat fifth-seeded Dylan Duncan of Illinois in the consolation quarterfinals, and he did just that, with an 11-7 decision. Filius seeded No. 9 in the tournament, would then fall to third-seeded Sebastian Rivera of Rutgers in the consolation semifinals, but, he bounced right back to beat Northwestern's Colin Valdiviez 5-2 to finish fifth overall.

Filius opened the Big Ten tournament with a win over No. 8 seed Drew Mattin of Michigan to reach the quarterfinals. He bested Mattin 4-3, before having to face No. 1 seed Jaydin Eierman of Iowa in the quarterfinals. Filius fell to Eirman Saturday afternoon but rebounded to beat 10th-seeded Danny Bertoni of Maryland 6-2 in the consolation second round, and that set up a big Sunday for the former four-time state champion from Havre.

Filius also helped the Boilermakers to a sixth-place finish with 76 points, while seven of his teammates qualified for the national tourney, which will beheld March 18-20 in St. Louis. Last year's NCAA tournament was cancelled due to the coronavirus pandemic.