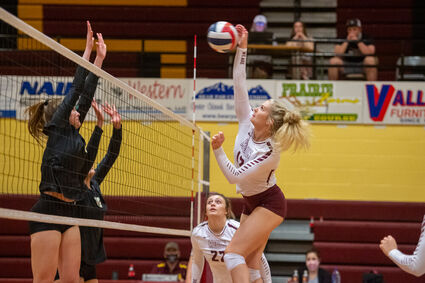 Montana State University-Northern's Alana Graves goes up for a kill during Friday night's Frontier Conference match against Rocky Mountain College in the Armory Gymnasium. In Northern's last home match of the spring, the Skylights lost to the nationally rankled Bears in five sets.

The Montana State University-Northern volleyball team was looking to end its regular season strong as they get set for the Frontier Conference postseason tournament next week. However, they had lost three straight heading into their Friday-night match against No. 17 Rocky Mountain College at the Armory Gym.

The Skylights took the Battlin' Bears to five sets, but ended up falling, 3-2, to end their regular season. Despite the loss, MSU-N head coach Jerry Wagner believes his team is playing their best.

"We played our hearts out and that's what I'm looking for at this stage in the game," W...