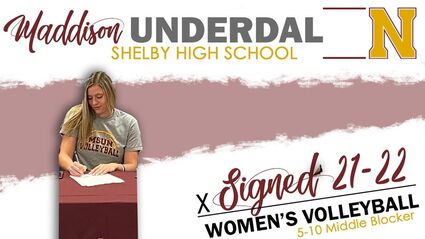 Last week, Wagner announced the signing of Shelby standout Maddison Underdal to join the Skylight program next fall. She will also be playing on the MSU-Northern golf team. Underdal is a 5-10 middle blocker, with career highs of 305 season hits, 81 season blocks, a 38 percent hitting percentage, and 89 percent serving.

"I'm very happy that Maddison has chosen to join the MSU-Northern Skylights Volleyball program," Wagner said. "I really enjoy the recruiting process when a talented student-athlete like Maddison finds that her best academic and athletic career choice is right here at MSU-Northern. She realized that Northern places an emphasis on family, academics and athletics, and they have the greatest fan support in the Frontier Conference"

"Maddison is a powerful athlete who will compete as a middle blocker, and she will join and grow alongside a strong core group of middles already in the program," Wagner said. "Maddison has an aunt who played basketball for the Skylights, Jena (Heggem) Hanson and her current volleyball coach played volleyball for the Skylights, Lexy (Ranes) Fisher. Coming from Shelby she will continue to be able to wear the Maroon and Gold."

"Maddison will see a lot of me as her coach in volleyball and even more of me as a fan/supporter out on the golf course, as she will also be competing for the Skylights on the women's golf team."

Maddison is the daughter of Peder and Kari Underdal. When asked why she chose Northern she said: "I chose MSU-N because of the volleyball program, and the town is close to my family. I love the coaching staff and, even though I haven't been able to meet the team, I'm certain I will feel like I'm part of a family. I'm also very excited to be part of the nursing program at Northern."