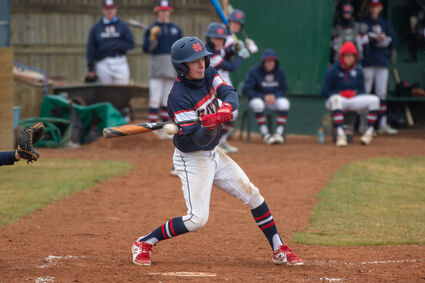 Havre's Tavish McLean bats during the first game of an American Legion baseball doubleheader Sunday afternoon at Legion Field. The Northstars swept the Great Falls Chargers in a pair of non-conference games.

With conference play still over a month away, the Havre Northstars American Legion baseball team looks to use the time to fine tune as they compete in non-conference games.

While the Northstars defeated the Great Falls Chargers in a pair of games Sunday at American Legion Field to remain undefeated, Havre head coach Patch Wirtzberger believes that his team still needs to play better.

"There's a lot of room for improvement I think. We kicked the ball around on defense quite a bit, had a lot of errors, and we'd really like to improve on that," Wirtzberger said. "At the plate, we started good, we were hitting the ball, we were doing everything that you need to do and as the day wore on, I think we just lost our focus a little bit."

The Northstars started the day with a tight win over the Chargers. They went into the bottom of the sixth inning trailing 5-4. With bases loaded and two outs, Havre pitcher Carson Lunak hit a single to left field that drove in two runs to take a 6-5 lead that would eventually give them the win.

"Just grinding away," Wirtzberger said. "A lot of good two-strike hitting in that inning where we got deep into our counts and ended up finishing it off there with a hit at the end."

The teams went back and forth throughout the first game. After Lunak recorded outs against the first two Great Falls batters in the top of the first, the Chargers got two singles and a walk to make it bases loaded. Lunak then walked another batter and hit the batter after that to make it 2-0.

The Northstars responded in the bottom of the first with two outs when Ethan Carlson hit a double to left field to drive in a run to make it 2-1. The Northstars then took the lead in the bottom of the second with two outs when Caden Jenkins hit a single to left field to drive in two runs to make it 3-2. This early offense differed from the Northstars' first three games where they could not get their offense going until late in the game.

"They were focused and they knew what pitches they were looking for," Wirtzberger said. "That's what it takes if you're going to score runs early."

A bases loaded walk in the bottom of the third further extended Havre's lead to 4-2. In the top of the fourth, the Chargers got their offense rolling to retake the lead. A Lane Seim single drove in a run to cut the deficit to one. A Brody Nanini error then allowed a runner to score to tie the game, 4-4. At the next at-bat, the Chargers capitalized on another Havre error to score and take the lead.

The Northstars pulled through again in a late innings, as they retook the lead in the bottom of the sixth. Eli Cloninger started the inning by earning a walk and then Nanini reached base after getting hit by a pitch. Lunak then brought them both home with a single.

"Trenton was great. Not only did he do a job good throwing the ball, but he fielded his position," Wirtzberger said.

The second game Sunday was not as close, with the Northstars winning, 11-2. Havre quickly took control of the game in the bottom of the first when an error by Great Falls pitcher A.J. Sloan allowed Jenkins and Nanini to score to make it 2-0.

The Northstars then put the game away early in the bottom of the second. With bases loaded and no outs, several walks and wild pitches allowed Havre to push its lead to 10-0. With the game firmly in control, Wirtzberger believes that it gave his players the chance to focus on what they can improve on.

"In a game like that, you just got to keep working on what you need to do to improve," Wirtzberger said. "We didn't have a lot of hard hits in that second game but good things to note that we know we need to work on this week in practice."

The wins improved the Northstars to 5-0 this season. While Wirtzberger believes that his team could have played better against Great Falls, it allowed his players to gain more experience.

"Always a good thing when you can get a sweep at home," Wirtzberger said. "Everybody got some playing time today and that's great because we'd love to get everybody experience."

The Havre Northstars next play the Bitteroot Bucs in a doubleheader Saturday starting at 6 p.m. at American Legion Field.