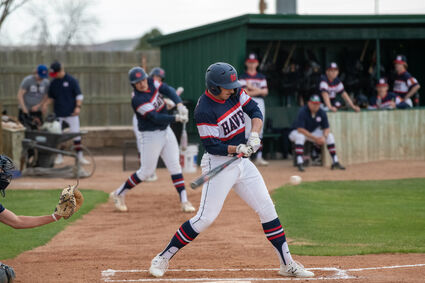 Havre's Ethan Carlson takes a swing during Game One of Saturday night's Amercian Legion baseball doubleheader between the Northstars and the Bitterroot Bucs at Legion Field. The Bucs swept the Northstars.

The Havre Northstars American Legion baseball club was riding high on an undefeated start to the season when they hosted the Bitteroot Bucs Saturday night at Legion Field. The Northstars were 5-0 on the season and had won four of them by at least five runs.

However, the undefeated streak came to an end when the Bucs handed the Northstars their first two losses of the season, both by double digits.

"A couple of tough games," said Northstars head coach Patch Wirtzberger. "Throughout the day, I think we made a lot of mistakes in the field and good teams like that will make you pay for it and that's what happened all day long."

In their first game Saturday night, the Bucs got it going early when they took a 1-0 lead in the top of the first inning when Troy Larson stole home plate. The Northstars responded in the bottom of the first when Brody Nanini tied the game with an RBI single to center field.

The Bucs took control of the game in the top of the second, starting with a Northstar error that allowed the Bucs to take a 2-1 lead. With two outs in the inning, the Bucs did their worst damage. A Caden Zaluski single to center field made it 3-1 and then a single from Zach Christofferson extended it to 5-1. Dan Barthels then hit a double to left field to drive in two more runs to make it 7-1. Wirtzberger believes that these runs could have been avoided if his defense had been able to make plays earlier in the inning.

The Northstars cut into the Bucs' lead in the bottom of the second. A single from Jayce Jensen drove in a run to make it 7-2 and then a Buc error allowed two Havre runners to score to make it 7-4. However, the Havre defense could not hold off Bitteroot.

The Bucs scored two more runs in the top of the third to make it 9-4, again with two outs in the inning. In the top of the fourth, they extended it to 10-4. The Northstars scored in the bottom of the fifth with a Nanini RBI single but it did not matter as the Bucs went on to win, 16-5, and handed Havre their first loss this season.

The second game of the doubleheader did not go much better for the Northstars as they quickly fell behind. In the top of the first, the Bucs took advantage of several Havre errors to take a 4-0 lead. By the end of the third inning, Bitteroot had built themselves a 10-0 lead.

Havre finally got on the board in the bottom of the fourth when Drake Barreth hit a double to left field that drove in a run to make it 10-1. However, the Bucs continued to score as they extended their lead to 12-1 before the game was called after five innings.

Carson Lunak pitched the most innings for the Northstars Saturday with four, all of which came in the first game. In his four innings, he struck out three batters and walked four. While he allowed 10 hits and 10 runs, only four of them were earned.

"Pitching was solid. That's a good team. It's hard to shut them down all day," Wirtzberger said. "They're a relentless offensive team but we gave them a lot. Got to give it to them, they hit the ball hard all day long."

Nanini led the Northstars with two RBIs and three hits Saturday, all of which came in the first game. Eli Cloninger scored two runs on Saturday, both in the first game. While Wirtzberger does not believe his team had a bad day offensively, he believes they need to be better at capitalizing on scoring opportunities.

"We need to figure out a way to cash those runners in and score those runners with two outs and I think that was the big difference in the first game," Wirtzberger said.

Havre is now 5-2 on the season with the two losses. They will not play a game for the next couple weeks, so they will have plenty of time to improve with practice. Wirtzberger believes that Saturday's results do not reflect what his team is capable of and hopes the time off will help them reach that potential.

The Northstars will next play May 16 when they host the Helena Reps at Legion Field. 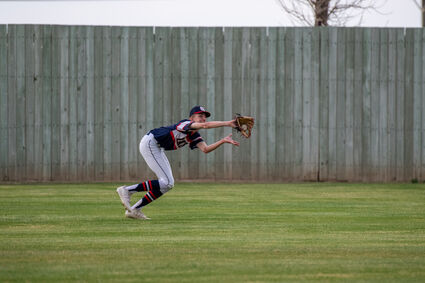