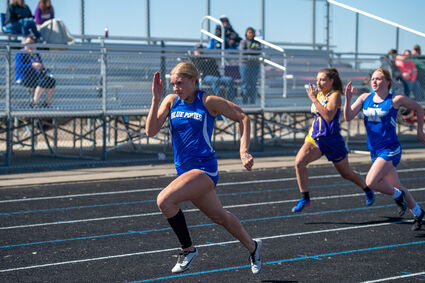 Tamera O'Leary and the Havre High track teams were supposed to host a 10-team meet Saturday, but rain canceled the event. Havre finishes the regular season Friday in Sidney.

The Havre High track and field team will not get the opportunity to compete at home one last time this season as the Havre Invite was cancelled. The meet was scheduled for Saturday at Havre Middle School but inclement weather prevented the meet from going forward.

While the Blue Ponies are disappointed in not getting the chance to compete, HHS head coach Ryan Gatch is especially disappointed that his seniors don't get one more home meet before their Havre careers end.

The meet would have been senior appreciation day for the Ponies' senior class. The Ponies will now have an event at Havre High School Monday at 5 p.m. to honor their seniors, which Gatch believes his seniors have more than earned.

"If it's not about the kids, then it's not about anything when it comes to athletics," Gatch said. "They do such a great job representing our community and they're fantastic athletes."

Gatch believes if there is one silver lining to the cancellation, it's that it will allow his athletes the chance to rest and continue to recover from injuries that might prevent them from competing at their best late in the season.

The Ponies now only have one meet before postseason competition as they will head on the road to compete in the Sidney Twilight this Friday. While his athletes are disappointed in not getting to compete at home one last time this season, Gatch believes they will be ready to compete again.

"It's not going to take much to refocus," Gatch said. "We're looking forward to a real strong finish on the season."

The HHS track team will next compete in the Sidney Twilight this Friday starting at 3:30 p.m. The Havre Middle School Track will be busy this week with the annual District 9C Meet Wednesday.