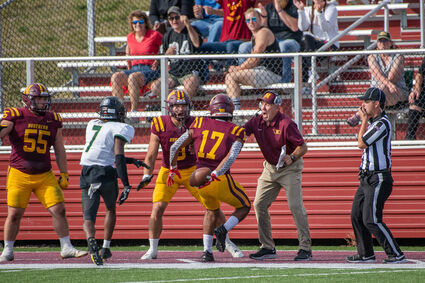 Just when it looked like the Frontier was getting somewhat settled, last Saturday was like an earthquake that rattled the entire league. And the biggest winner was the Rocky Mountain College Battlin' Bears.

Going into last Saturday, Montana Western seemed like the team to beat in the Frontier, but Rocky changed all that with a 41-31 win over the Dawgs in Billings. On that same day, Carroll College upset College of Idaho in Caldwell, and Southern Oregon blew out rival Eastern Oregon, handing their second straight loss after a 3-0 start. And when the dust settled on all that, it was Rocky that is now left standing alone at the top of the league standings at 4-1.

It's been a resurgence for the Bears who struggled in 2019, and again in the special spring season of 2020. And a big reason why has been the combination of a healthy Nate Dick at quarterback, and a defense that has bent at times, but hasn't broken.

Dick, who has been injured in each of the last two seasons, has thrown for 1,299 yards and nine touchdowns. He's also leading the Frontier in total offense. On the other side of the ball, Rocky is allowing less than 30 mpg, which is one of the best in the Frontier, especially given the top offenses this season.

Of course, the Bears only have a one-game lead in what will be a tight Frontier race, and they head to hurting EOU this Saturday, before the league's scheduled bye week on Oct. 16.

Speaking of stingy defenses, the Montana State University-Northern defense, under the direction of Mike Van Diest, has been vastly improved the last two weeks. And now, Van Diest's unit will be put to the ultimate test as he stands on the sidelines of famed Nelson Stadium, where he won six national championships as the head coach of Carroll College.

Northern visits Carroll this Saturday, and it will undoubtedly be an emotional return for Van Diest, who retired in 2019, giving way to former Havre Blue Pony great Troy Purcell. Van Diest, however, didn't stay retired for long, having a short stint coaching in North Dakota, before being lured to Havre to be the Lights' DC this season.

And while Northern's defense got off to a bit of a difficult start, the Lights have been strong as of late, especially in the takeaway department. Northern's defense has forced four interceptions and seven total takeaways in tough losses to RMC and Montana Tech the last two weeks at home.

Now, the Lights will try to get over the final hump in what will likely be Van Diest's only return to Nelson Stadium in the near future. Northern, of course will be up against a great defense in its own right, as Purcell's squad leads the Frontier, allowing just 21 points per game. The Fighting Saints are especially good against the run, allowing just 111 yards per outing.

So, Saturday's game in Helena won't just be an emotional return to the sidelines for Carroll's greatest coach in history, but, it will be a battle of two really good defenses.

Carroll College freshman quarterback Jack Prka was named Frontier Conference Offernsive Player of the Week. In Carroll College's 28-21 come-from-behind road conference win over No. 23 College of Idaho, Prka was 15 of 27 for 231 yards and two touchdowns. He was 5 of 7 for 134 yards on the game tying and game winning drives.

SOU wide receiver Shane McLaughlin was named Frontier Special Teams Player of the Week. In Southern Oregon's 24-3 upset conference win over No. 18 Eastern Oregon, McLaughlin had a fourth quarter 95-yard kickoff return for a touchdown. It was the seventh longest in SOU history.