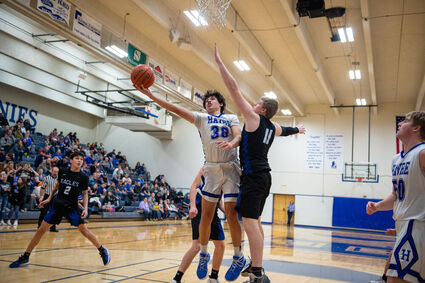 Havre's Isaac Pedraza goes for a layup against Fairfield at Havre High Gymnasium Friday night. Despite having a lead heading to the fourth quarter, the Blue Ponies lost, 59-49, to the Eagles.

Over the past week, the Havre High boys basketball had already faced much adversity. As the Blue Ponies were trying to prepare for Fairfield, the Ponies dealt with injured and sick players as well as a finals week that cut into their practice time.

On Friday night at Havre High Gymnasium, the Blue Ponies wound up losing, 59-49, to Fairfield. But with all the adversity they had faced, HHS head coach Walynn Burgess was proud of how his team battled.

"These kids are literally fighting through adversity and it's wild watching the swing back and forth," Burgess said. "Give it up to Fairfied. Those kids have been in the state tournament for the last four years or something like that and they play hard. We knew that we were going to be in for a battle so kudos to them."

The Eagles scored on their first possession of the game with a layup from Owen Cartwright-Gines. But Xavier Butler and Caden Jenkins responded with a pair of buckets to take a 4-2 lead for Havre. The Eagles then responded with a 10-3 run to take a 12-7 lead late in the quarter.

Xavier Butler and Shane Patadscil cut into the deficit with a pair of buckets. After a layup from Daniel Faith, Josh Currie made a corner three to tie the game, 14-14, to end the first quarter.

The Ponies and Eagles continued to trade baskets through the second quarter. They found themselves tied, 21-21, with four and a half minutes left in the half. The final minutes of the half saw the teams go on to exchange the lead.

After Cartwright-Gines gave the Eagles the lead, Patascil made a 3-pointer to retake the lead for the Ponies. The Eagles took the lead back with a layup from Cooper Christensen but Butler responded with a bucket to take it right back. With just over a minute left in the half, Faith made a layup to give Fairfield a 27-26 lead that they held onto heading into halftime.

The Ponies looked to turn the page in the third quarter as they came out strong. Caleb Spangler got things started with a layup to give Havre the lead. Even after Fairfield took a 34-30 lead, the Ponies responded with an 8-0 run to take control. Jevin Jenkins made a pair of layups to lead Havre during the run.

The Eagles cut their deficit to one point late in the third, but the Ponies maintained control. In the final two minutes of the game, Havre went on a 8-2 run. In the final seconds of the quarter, Butler made a layup to give Havre a 46-39 lead heading to the fourth. Burgess believes the Ponies controlled the third quarter because they got things going down low in the post.

"We were starting to get it inside and trying to get it to the hoop. Not just on post ups, I mean attacking the rim, making them suck in for easy kick outs. Just those things of playing our style," Burgess said. "It was good to see us start getting it inside again in the third quarter so it was a really good way to respond coming out of halftime."

But the Ponies could not maintain control to start the fourth. The Eagles went on a 10-3 run to tie the game, 49-49, with four and a half minutes left in the game. The Eagles then got a steal from the Ponies that they converted into a bucket to take a 51-49 lead. Turnovers were a problem in the fourth quarter for the Ponies so it will be something that Burgess will focus on moving forward.

"We have to tighten up. We can't make those mental mistakes like that," Burgess said. "I thought we were having some floaty problems as far as passing goes and it was just little things like that."

Over the final few minutes, the Eagles pulled away with an 8-0 run to win the game. Even though the Ponies had battled through most of the night, they could not keep up with the Eagles anymore.

"They just had a lot more energy than we did. We ran out of gas," Burgess said. "That gas tank was empty, we were trying to find it and it just caught up to us."

The loss dropped the Ponies' record to 4-5 this season and was their second loss in a row. Patascil and Isaac Pedraza each scored 10 points to lead Havre. Christensen led Fairfield with 16 points while Kaelob Flores chipped in 13 points in the win.

The Ponies now look to move on from the loss as well as the adversity they had faced this past week. While the Ponies are still trying to find their rhythm, Burgess believes they can hang their head on their resiliency.

"Those kids showed up tonight and gutted one out. Win, loss or draw, it doesn't matter," Burgess said. "I'm just really proud of the way they stuck to their guns and came out and gutted it out." 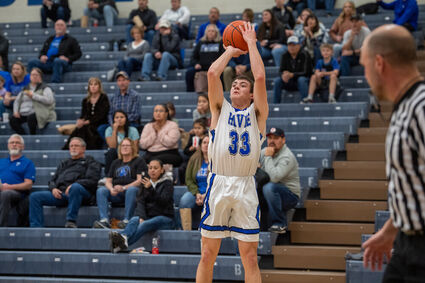 The Ponies will look to rebound when they play on the road at Glendive on Friday night. Havre visits Sidney on Saturday.