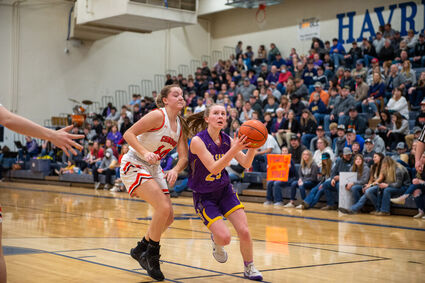 Big Sandy's Eva Wagoner, right, heads towards the basket against Chinook at Havre High Gymnasium on Thursday night. As her junior year in the Big Sandy girls basketball program comes to an end, Wagoner has seen improvement in the program and hopes to keep building on that to turn the Pioneers into a competitive squad.

The Big Sandy girls basketball team has not recently been thought of as one of the top teams on the Hi-Line. But junior Eva Wagoner is hoping to help turn around the Pioneers and make them a competitive squad in the District 9C. While they were only the No. 7 seed heading into the district tournament, Wagoner believes Big Sandy has had a promising year.

"I think we've progressively gotten so much better, especially since last year," Wagoner said. "As a team, we're all coming together and I think we're going to have an even better season next year."

Even though Wagoner started her basketb...