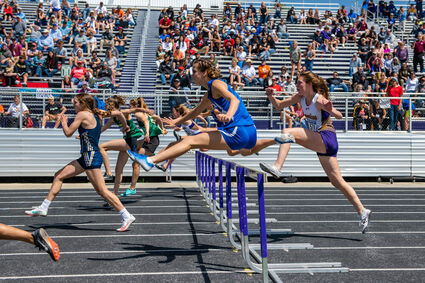 Havre's Emma Gillen hurdles at the Class A State track meet in Laurel last season. In her final year with the Blue Ponies, Gillen hopes to set a new personal record while also enjoying competing alongside her teammates one last time.

The spring season finally began for the Havre High track and field teams this past weekend with the Glasgow Invitational. With the meet, many seniors began their final year with the Blue Ponies. It will be bittersweet for senior Emma Gillen, whose favorite part of spring is the track season because she gets to enjoy the weather and spend time with her teammates.

"I just really like getting out in the sun and getting into spring," Gillen said. "I like the team because even though it's an individual sport, it's a little family and everyone just has so much fun with it."

In her final year with the Ponies, Gillen will mostly compete in the 100-meter and 300-meter hurdles and will try out the long jump and some sprints. Gillen began competing in track in middle school and has competed in it through all four years of high school. Through the years, the 300-meter hurdle has become her favorite event because of the difficulty and the fact that she gets to compete in it along with her teammate Sadie Filius.

"It's one of the hardest events but it feels really rewarding when you PR and do good at it," Gillen said. "I get to do it with Sadie as we've been doing it together since freshman year."

Gillen looks forward to the Top 10 meet in Glasgow early in May as well as the divisional and state meets to end the season. With just a few months left of her high school career, Gillen wants to end her career on a positive note.

"(I hope to just be) getting the most out of it and get a lifetime PR in all my events and just end it in a good way even if I don't place at state," Gillen said. "Just ending it on a positive note and seeing all my senior friends do well."

Gillen never stops running as she competes in cross country and she runs during the offseason to stay ready for track. While she has competed in other sports through her high school career, cross country and track have been her main passions through all four years.

Once her senior season is done, Gillen will head to Montana State University. She originally planned on running for Pacific Lutheran University in Washington but she decided she wanted to stay close to home to begin college. At MSU, Gillen plans on majoring in either wildlife management or art.

Gillen and the Ponies will continue the season with the Cal Wearley Memorial meet at the Havre Middle School Track on Wednesday. Before she gets back on the track, the Havre Daily News got the chance to ask Gillen five questions.

HDN: What have you learned from your time on the HHS track and field team?

Gillen: "I've learned that the offseason is super important, and I've learned that you can't give up because earlier in my freshman year, I was just so defeated because I saw all these people doing so well and wondering why I am not doing that. But if you really stick with it and love what you're doing, even if you're not doing good, you'll get better."

HDN: In track and field, what motivates you?

Gillen: "Probably those ribbons and just all my friends because all your friends are always next to you and cheering you on. It feels really good when your parents or your friends or your coaches see you hit that PR."

HDN: What's the most difficult part about track?

Gillen: "Definitely getting up at 5 a.m. for the bus and then the other difficult thing is, when you don't hit that PR, is picking yourself back up because it really sucks when you don't do as well as you thought you would. But that's the nice thing about having so many people (on the team). Everyone shares the same strengths and downfalls so everyone knows how to lift you back up again."

HDN: Do you have a favorite track memory?

Gillen: "Probably my freshman year of state and divisionals because it's always fun being a freshman and seeing all these people older than you compete and do so well."

HDN: What do you like to do in your free time?

Gillen: "I really enjoy doing art such as painting. Every medium pretty much. Art is just super fun and I've enjoyed that since I was little. And then I just run all the time in the offseason and hang out with my friends."