Chinook High School moving back to Class B

Sugarbeeters will join District 1B, remain in 8-Man football 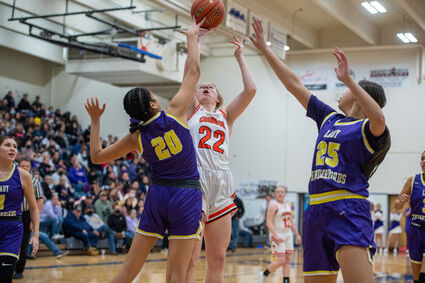 Chinook's Hallie Neibauer shoots over the Hays-Lodge Pole defense during a 2022 District 9C girls tournament game. Next school year, the Sugarbeeters will no longer be in the 9C as the school is moving back up to Class B.

In Montana, things change. And that holds especially true for its rural towns, including on the Hi-Line. So, with that said, it's back to Class B for Chinook High School.

On Wednesday, the Montana High School Association announced realignments for the 2022-23 school year, with Chinook a part of the changes.

For more almost two decades now, Chinook sports had been a member of the Class C District 9C, and after more than two decades prior in Class B. Now though, Chinook will once again be a Class B school due to growing enrollment over the past three years.

This move back to Class B, howe...