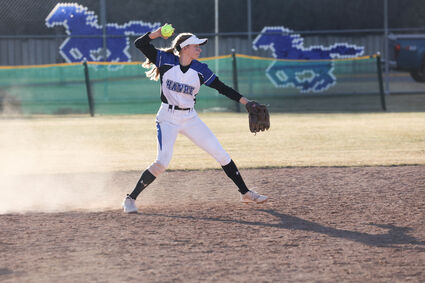 Havre's Danni Wirtzberger throws to first base against Lewistown at Sixth Avenue Memorial Field earlier this month. The Havre High softball team will compete in four non-conference games at a tournament in Frenchtown this weekend.

It has been a tale of two seasons for the Havre High softball team this spring. The Blue Ponies are off to a strong start in conference play as they are undefeated in the Northeast A. But on the other hand, they have yet to pick up a win in non-conference play.

This weekend, the Ponies look to make way in non-conference play as they will compete in a tournament in Frenchtown. As they look to win their first non-conference game this season, HHS head coach Tony Vigliotti feels good about their chances this weekend.

"We expect to play well. We've worked a lot on our little things and our defense the last week and a half," Vigliotti said. "We're playing well offensively. We're getting contributions from everywhere so hopefully our defense will show up this weekend."

The Ponies start the tournament with a game against Stevensville today at noon. Stevensville comes from the Southwest A and has a record of 4-3 this season. The Ponies will then continue the weekend with a game at 4 p.m. today against Columbia Falls. The Wildkats are having a strong year as they have a 9-1 record and are first in the Northwest A.

The Ponies and Wildkats have already faced off this year in a tournament in Lewistown earlier this month. It was a close game with Havre holding a 4-3 lead late in the game. The Wildkats surged at the end to pull out the 8-4 win but Vigliotti knows they are not unbeatable.

"We know that we can play them," Vigliotti said. "We expect to compete with them again."

The tournament will continue with another pair of games Saturday. The Ponies start the day with a game against Hamilton at 3 p.m. Hamilton comes from the Southwest A and has a 1-4 record this season.

The Ponies will then wrap up the tournament with a game against Frenchtown at 6:45 p.m. Frenchtown is having one of the best seasons in the state with a 10-0 record to hold first in the Southwest A standings.

The Ponies enter the weekend with a 5-4 record, with all four losses coming in non-conference games. If they want to stay above .500 this weekend, they will need their best players to continue their strong seasons.

In five starts at pitcher this season, Avery Carlson has a 3-2 record and has recorded 26 strikeouts, 26 walks and a 4.760 ERA. Elle Verploegen has also started two games this season for a 1-1 record with nine strikeouts and eight walks.

The Ponies also need their offense to continue rolling. Molly Huse leads the Ponies at the plate with a .739 batting average, 22 RBIs and four home runs. Alyssa Oliver has also had a strong year for Havre with 16 RBIs and a .625 batting average. Lizzi Haney has made an impact with 15 RBIs and .667 batting average.

The last time the Ponies played in a tournament was one in Lewistown earlier this season. During that weekend, the Ponies suffered all four of their losses this season. They lost to teams such as Columbia Falls and Billings Central, who have a combined record of 14-1 this season. While he believes they had their defensive struggles at that tournament, Vigliotti feels confident with the direction of the Ponies this season.

"We feel good about where we're at," Vigliotti said. "It's a process, this whole season. We just want to be playing our best in about three weeks here when the divisional tournament rolls around so we'll just keep working on it."

The HHS softball team begins the Frenchtown tournament today at noon with a game against Stevensville.