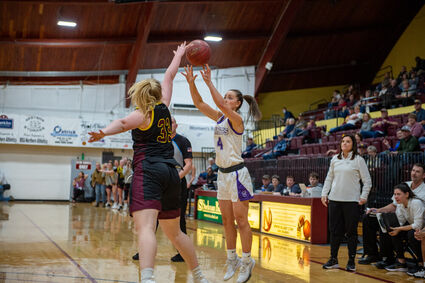 Former Havre High standout Dani Wagner, right, playing for Carroll College, has her jersey displayed in the Women's Basketball Hall of Fame Ring of Honor in Knoxville, Tennessee, for her outstanding 2021-2022 season.

Dani Wagner had an incredible college basketball career for the Carroll College Fighting Saints. And the former Blue Pony great was bestowed an awesome honor this summer.

Wagner's jersey was placed on the Ring of Honor display at the Women's Basketball Hall of Fame in Knoxville, Tennesse, in recognition of her outstanding play for the 2021-22 season.

Wagner, a guard from Havre averaged 15.1 points per game, shot 51.3 percent from the field, and knocked down 43.3 percent of her threes in her senior season. It was her third straight season as the Saints' leading scorer.

With over 100 jerseys in the rafters, the Ring of Honor displays jerseys of some of the best high school and college players in the country from the previous season. Players along the lines of Candace Parker, Sue Bird, Kelsey Plum, Breanna Stewart, and Aja Wilson have had their jerseys displayed there.

"It is such an amazing honor to have a jersey hung in the Women's Basketball Hall of Fame. In my time here, we have had the honor of having four there, starting back with Torrie Cahill in 2013, followed by Katie Estey, then Hannah Dean, and now Dani Wagner. It is a tribute to our players and the teams they represented," said head coach Rachelle Sayers. "I feel honored to have coached some of the very best to play in the NAIA and to have their Carroll College Women's Basketball jersey hung in the in the Ring of Honor at the Hall of Fame is very special."

Wagner put together an illustrious career in a Carroll uniform, being named an All-American three times and finishing as the program's second all-time leading scorer.

"I've got to say that I feel absolutely honored, grateful, and blessed," Wagner said. "I truly can't believe I was chosen but can honestly say that if it wasn't for the persistency and dedication from coach Sayers over the years and legends like Hannah Dean guiding me along the way, none of this would have been possible."

"I am thankful that I was one of the 100 female athletes chosen, and I will cherish this forever," Wagner added.

Wagner starred in volleyball, basketball and softball in her time at Havre High.