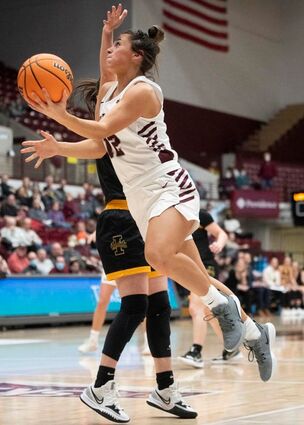 With the University of Montana, Kyndall Keller goes for a layup against Idaho at Dahlberg Arena this past season. After two years with the Lady Griz, Keller has announced she will sign with Carroll College for the last two years of her eligibility. Both her parents played college basketball for the Fighting Saints back in the day, while her late grandfather, Jim Gross, coached the team in the 1990s.

The past two years, former Blue Pony Kyndall Keller represented the Hi-Line well as she played for the University of Montana women's basketball team. But she has decided for a change as she has announced she will be transferring to Carroll College to play for the Fighting Saints.

Keller has many ties to the Carroll College hoops. Both her parents played for the Saints back in the day, so she will be carrying on a family legacy. Her grandfather, the late Jim Gross, coached the Carroll College women's basketball program in the 1990s.

Keller also has connections to the current Carroll coac...