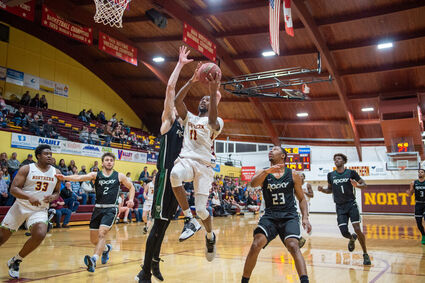 Northern's Mascio McCadney goes for a layup against Rocky Mountain College at Armory Gymnasium this past season. McCadney will continue his basketball career after signing with La Salle Olympic, a professional basketball team in Cochabamba, Bolivia.

Playing collegiate basketball is a dream for many and Mascio McCadney got to do that with the Montana State University-Northern men's basketball team for the past few years. Now that his collegiate career is over, McCadney will continue to play basketball in Bolivia professionally.

McCadney signed with La Salle Olympic in Cochabamba, Bolivia. The team is a part of the Libobasquet league, the top professional basketball league in Bolivia. It is a young league as it was founded in 2013 and is made up of 12 teams scattered across the South American nation.

As he heads to South America, McCad...