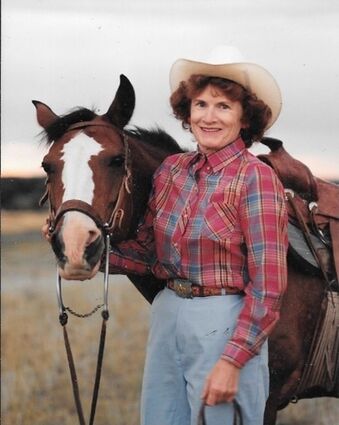 Cremation has taken place, and a celebration of Cynthia's life will be held at 3:00 p.m. Friday, September 16, 2022, at the Van Orsdel United Methodist Church. Burial will take place later with her parents in Canada. Memorial donations may be made in Cynthia's memory to the Cynthia E. Bryson Rodeo Scholarship Fund, Van Orsdel United Methodist Church, or to the charity of the donor's choice. Holland & Bonine Funeral Home has been entrusted with arrangements.

Please visit Cynthia's online memorial page to send a card or leave a message of condolence for her family at http://www.hollandbonine.com .

Cynthia was born on August 18, 1934, in Estevan, Saskatchewan, Canada, to Akbar and Bethine (Smith) Bryson. She was raised in Estevan, riding horseback to attend rural elementary schools; Brown and Dale, and graduating from Estevan High School in 1952. Cynthia moved to Missoula, MT, to attend the University of Montana, where she graduated with her bachelor's degree in education in 1956. She taught for two years in Glendive before moving to Helena to worked for the Montana Office of Public Instruction as a nutritional consultant for school lunch programs.

She returned to college, this time at Montana State University in Bozeman, where she received her master's degree in family counseling in 1969. Cynthia then accepted the position of dean of student affairs for Northern Montana College, a position she held for 18 years until her retirement in 1987.

Six months after retiring she went to work for New York Life for a short time and then was a census taker.

She especially enjoyed many years of working with Steve Helmbrecht traveling to area schools to take school pictures. She always enjoyed interacting with the students.

Cynthia was a kind woman who put others before herself and fiercely believed in education for all, regardless of age. She was an active member of Van Orsdel United Methodist Church and volunteered for many organizations over the years, including Country Charms Drill Team, HILTRA, Sands Memorial Foundation, Northern Montana Health Care, and the North Central Senior Citizens Center, just to name a few. She was always smiling and enjoyed gently teasing her friends and family. Cynthia also enjoyed traveling, having traveled all over Europe with only her mother in the 1950s, and she continued traveling throughout her life, most recently with her best friend and "soul sister," Andrea Christenot.

She was preceded in death by her parents, Akbar and Bethine Bryson; brothers, Neil and Doug Bryson; sister-in-law, Olga Bryson; and nephew, Bruce Bryson.